It's been quite some time since I posted on any progress for my Nippon Castle (or anything in general  on the blog). So with that in mind it's time to show some progress. I completed the construction on the castle around the first of the year and have been working on painting it off and on. I was looking back through the photos of it and it appears that I started working on it in 2013 as outlined here, it's well past time to wrap this up. IMPORTANT NOTE: the painting on this is very much WIP. 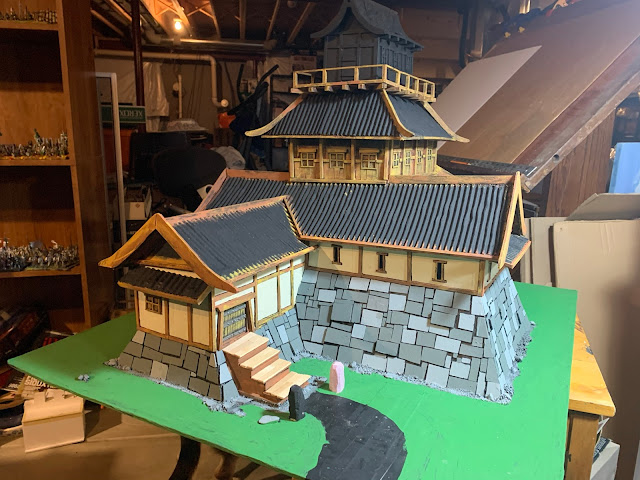 The castle started out as just the base keep itself and the layout inspired by Kakegawa castle in Japan. As with any castle in Warhammer and at the 25-28mm scale its bound to be on the larger side, there is really no way around this.

The great thing about a project like this is that for those who want to create something like this for their own armies, whether a Nippon one or not is that its really not that expensive. The castle is really nothing more than the following: cardboard, white glue, super glue, craft sticks, balsa wood, tooth picks, masking tape, and duct tape.The base of the castle proper and the walls are formed from foam-core boards to keep it light. While it might not make the base as strong as say plywood, it does save on weight.

So with all that in mind, in order, the following are complete in terms of painting:

Now, a note on when I say complete: the large area painting is done, as is about 99% of the detail painting. With the moats there is still a bit more that has to happen with the water area, but those are pretty well finished. I anticipate having to do some more detail here and there to truly finish it up.

For the towers there is still a bit of work to do on the removable roofs. I'm also not sure if I want to add a contrasting color like blue to them. The idea of the color also applies to the roof on the main keep.

So what is all this leading to? My goal is to get this complete by the end of the year. I've been working off and on a traditional European style, Empire castle in the vein of the old Warhammer Mighty Fortress which will be smaller and a bit more practical for Siege games. The Nippon castle has also been going on for seven  years, time to finish it up!

Only snag is simultaneously to this I'm also working on clearing the considerable backlog on the  painting desk.