Review of the Boot Hill Module BH3- Bullets and Ballots 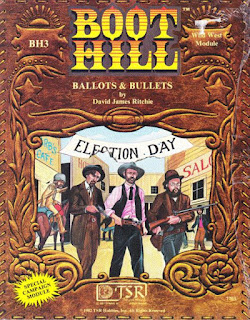 The next Boot Hill module up for review is BH3- Bullets and Ballots. This should come as no surprise if you have been reading the blog here, and you have been reading correct? Unlike the first two modules BH3 is kinda of like a mini-campaign all in one module (but no where near what is presented in BH4- Burned Brush Wells and BH5- Range War). Bullets and Ballots takes the players on a very different ride then either of the first two modules and on a different path then almost any other module: the players take part in an election and possibily effect the outcome. I'm hard pressed to think of any other module that tackles this subject matter, let alone in the early 1980s.

Written by David James Ritchie expands on content from the box set, namely taking place in Promise City as it expands the map of the city presented. The events in Bullets and Ballots takes place shortly after the events in Tombstone to the west (i.e. the fateful Battle of the OK Corral).  BH3- Bullets and Ballots is a standard length module at 32 pages and does manage to pack into quite a bit of information into it. The expansion of Promise City means that the GM has a lot of work done for him in terms of a home base assuming the PCs decide to make the place as such.

The premise is that Promise City is as lawless as a place as one might find in Cochise County Arizona. Infamous/famous luminaries who might be found around its environs include Johnny Behan, Billy Breakenride, Ike Clanton, "Buckskin Frank" Leslie and others. As noted there are 300 individual NPCs coveed in the book further rounding out the cast of characters.

The Law and Order faction (the law abiding townsfolk) have had enough and are attempting to clean up the town. The Cowboys will have none of it. Add to this there is an election coming soon and both sides are trying to make sure they win it whatever the cost. The stakes are high as the elections are for mayor, city council, and town marshal.

The events of the module take place over a 12-week period and there is plenty to keep the PCs busy. First off they might run for an office or get behind one of the factions vying of an office. Each week public sentiment shifts based on activities related to the campaign as well as the seedier side of things should people start to be killed as as result of the campaign. There is also options for funneling money into the race (things haven't changed in over a 100 years now have they?), spreading rumors, running broadsheets and making speeches. There is even provisions for the current administration, the Civic Association to use their pull to hinder the Cowboys. Lastly there is also rules for the situation going to Hell in a hand basket. Should enough candidates be murdered the Army will eventually be sent by the Governor or at the very least Arizona Rangers will be sent to investigate/establish law and order.

When it is all said and done the Election will take place and the actions of the PCs along with the NPCs shift public sentiment enough to determine the outcome. The great thing about this is there is no predefined outcome: the results could conceivably be different each time one plays it.

The last few pages of the module and like the other products in the line that proceed it, there are 7 scenarios that can be used as part of the module or as standalone. I do like the nods here to great Westerns giving them titles that include "Hang 'em High" and "Once upon a Time in the West".

The Art: some of the art in the module I like, some I don't. This module more so then the ones before it suffers from more in-jokes. The art and the in-jokes are a bit much throughout. While I like irreverent humor as much as the next person it leaves a lot to be desired. An example is: "Zebadiah Cook" on page 16? The art looks to be Jim Holloway. Normally I like his slightly comical stuff, even in D&D but for some reason it doesn't work in this module. The front cover has the same tooled leather look, but the picture from what I understand were based on TSR staffers Jim Roslof, Jeff Easely, Jim Holloway and Larry Elmore. I'm fine with in-jokes, but the piece for some reason doesn't resonate with me. In fact I like the module inspite of the cover, not because of it (sorta of like the opposite of N2- The Forst Oracle- I like the cover the "module" is horrific). The back cover depicting Mongo Baily is likewise trying to inspire laughs and only makes me grimace instead.

Much like the first two modules in the Boot Hill series (BH1 and BH2), BH3 is a different premise altogether. The more I get into reading each one, it's clear more then ever that the series was really a rudderless ship. Either there was no one directing it along or support happened in fits and spurts as the time arose to allocate some resources to it. I think it was probably both given all creative, or nearly so energies were being poured into D&D and AD&D.

Despite the criticisms of it, I like BH3, but one needs to everyone playing it in the right mood for some intrigue. That's not to say it can't work, just its a departure from shootouts, which I imagine at some point is probably a nice change of pace in the realm of Boot Hill gaming. 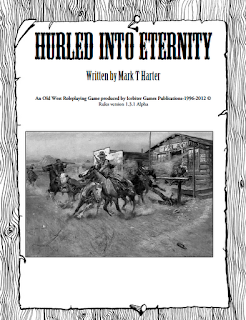 Hurled into Eternity moves out of Alpha to Beta
So for while now I've been working away on my very first RPG, and its nearing an important milestone: the end of the Alpha phase of the rules. I'm fairly confident that the rules are sound and well put together. The next step is to see about cleaning up the text as well as editing the overall effort.

For those not in the know, I created the initial rules for my game as part of a traditional fantasy game that I was to call Quest. Quest underwent numerous revisions over the years and sat dormant for even longer cycles (as I alluded to in my last post regarding this.

So here is what I expect to be the last version of Alpha as the rules now move to Beta.

If there are any folks brave enough to volunteer their time for editing please let me know.

Download rules to Hurled into Eternity here
Posted by Willmark at 10:21 PM No comments: