Of Faramir, Captain of Gondor

So as a family, we’ve sat down and have been watching the Lord of the Rings movies and the kids have enjoyed them. My son being younger has been fidgeting around a bit, but my daughter has watched all the way through. Last night we finished the Two Towers. As a quick aside she likes as I do both Samwise and R2D2, there are a lot of parallels there and maybe I’ll cover that down the road, but back on topic. 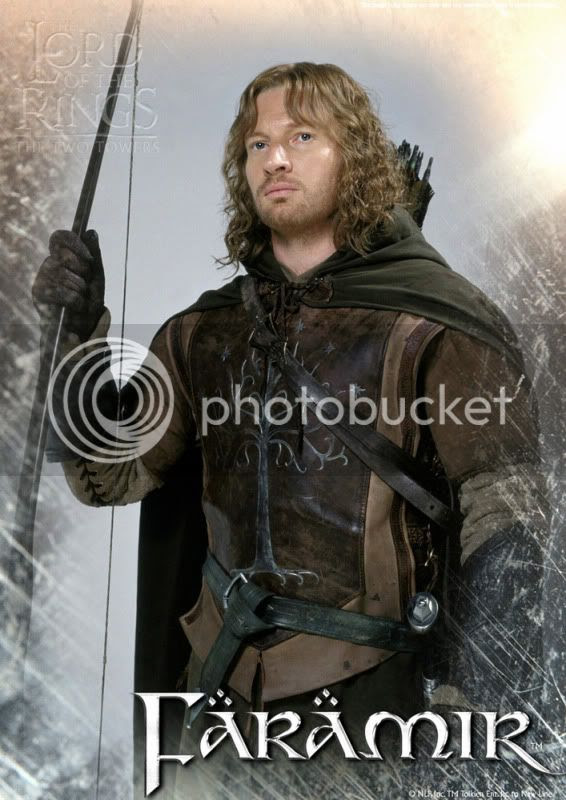 As we watched the Two Towers last night I took another look at Faramir and how much Peter Jackson bungled the character or at least the context of the character as written by the good professor. The Professor is on record as saying that of all the characters, Faramir is him or a personification of that which Tolkien identified with. Before I get into this I will state that I enjoyed the movies immensely and the changes that they made for the most part made sense (example the Elves at Helm’s Deep). Most of the changes work better in the constraints of the movies. I’m not that rabid, and no all you fatbeards, Tom Bombadil still sucks and he's entirely unnecessary, certainly for the movies. I’m not that unreasonable, but with the case of Farmir it looks like even Jackson realized he erred in the movie depiction of Faramir and tries to “correct” some of it in the extended version of the Two Towers.
Peter Jackson missed the whole point of Farmir and the two sons: Boromir and Farmir. Easy to say and I don’t think there will be much disagreement here. For those not in the know, a quick recap as these three characters all revolve around each other beyond the familial ties.
To what am I referring in a round about way? In the extended DVD version of the Two Towers where we meet Faramir and we see how badly Jackson failed to understand this seemingly minor character as Tolkien wrote him. Faramir is depicted as succumbing to the power of the One Ring and willing to hand it over to his father. Problem is that Farmair was the one character that Tolkien wrote that the One Ring had no sway over, think about that statement for a minute. Of the entire myriad of characters that appear in the books, it is Farmair and Faramir alone that is immune to it (Bombadil doesnt count as he's so nonsensical). In the books even Sam considers the possibilities for the brief time he is a ring bearer, but not Faramir. With the extended version of the movies it gets worse in my opinion as  Jackson basically admits to two things with Faramir, one the that the movie needed something else with the shift of some of the scenes from Two Towers to Return of the King. So some of it what dictated by the needs of the movie. Ok, so on that level I understand what he did. Two, he is on record (paraphrasing here) that “having someone immune to the power of the ring lessens its effect”. (Double blink, double face palm.) Well Peter, maybe you missed the whole point entirely and even missed it with the changes in your versions of the story. In fact if you took a step back you would have seen it plain as day.
Rather then have Faramir trying to prove himself in the movies “a chance for Faramir, captain of Gondor to prove his quality” you should have considered who and what Faramir was/is. Rather then having Farmir trying to be just like his older brother and win his father’s love it’s as simple as comparing the three and how Denethor treats his sons. Consider that the “prized” eldest son fails and is tempted by the ring, thereby not justifying the faith his father places in him. This makes it an easy contrast to see then when his second son who he has no use for (“Do not speak to be of Faramir, I know his uses and they are few”), is actually, at least in these terms, superior to his brother whom Denethor prizes so highly.
Instead of rushing to make Farmir the kid brother who desperately wants to prove himself to his father it would have been better to use Faramir directly out of the books. It was such a simple contrast and one so powerful that I don’t know how he could have missed it. I think he fails to give the movie goer credit here.
I can’t state it any better. Jackson created a wonderful set of movies and I have no doubt about his zeal. But on this one thing he whiffed and whiffed badly. He and his wife/writing partner  Fran (who took an excessive glee in my opinion) in mangling some key parts of the story missed the point of Faramir entirely.
Perhaps even more so then Frodo, Faramir has a Galahad quality to him. Farmir was designed to be immune to the ring, but for a reason that Jackson missed entirely. Farmir succeeding where Boromir failed highlights the differences between he two and the flaws in Denethor’s powers of observation. Jackson could havs used this masterfully but didn’t: Denethor grossly underestimates Faramir and as a result highlights his own failings all the more and also by contrast those failings of Boromir. If there is any doubt consider this:

Page. 280, The Two Towers, The Window on the West- "But fear no more! I would not take this thing, if it lay by the highway. Not were Minas Tirith falling in ruin and I alone could save her, so, using the weapon of the Dark Lord for her good and my glory. No, I do not wish for such triumphs, Frodo son of Drogo."

One would think that this is hardly open to interpretation there Peter.
The changes to Farmir change his character greatly and cheapen him in my honest opinion. In essence he is dumbed down simply to keep things consistent in the movies. Most moviegoers will never know of this, but for those that have ever read the books it leaps of the screen as an example of missing the mark as far as small part of the story of Lord of the Rings. No wonder some have dubbed him "Filmamir".
For more about Farmir and some details on Jackson's thought on why he changed Farmir in the movies: http://tolkiengateway.net/wiki/Faramir  or here: http://lotr.wikia.com/wiki/Faramir
Posted by Willmark at 9:50 PM No comments:

What the Hell is people's problems with THAC0?

First off a bit of history that currently adorns my signature on Dragonsfoot:

F is Frank, as in Frank Mentzer, longtime cohort of Gary Gygax and one of the few active folks from the advent of TSR and the role-playing age on DF. There are people who think of THAC0 as 2nd Edition AD&D creation when in fact according to Frank it predates 1st Edition and may even have been in common parlance around the time of the Lake Geneva Campaign. And again for those that don't know the Lake Geneva Campaign was the grand-daddy of them all in terms of RPGs; it was the one that Gary DM'ed and well, pretty much wrote AD&D as well know it.

Now on to THAC0 itself: THAC0 stands for "To Hit Armor Class (Zero)." In 2nd edition AD&D in melee combat, one rolls a d20 and compares it against their THAC0 score. For example if your THAC0 score is a 18 and you roll a 14 you would hit Armor Class 4. In other words, straight up on the die with no modifiers THAC0 represents the roll you need hit AC 0 on a d20. In a nutshell that's all there is to it. So why is it that people look like this when you bring up the subject of THAC0 in gaming circles?

Seriously simple math is that hard folks? The only argument that I can see possibly being made is for a unified mechanical rule of later editions which THAC0 is not. But, then again 1st and 2nd Edition has lots of wonky bits to it anyways. 3rd edition and later did tiddy up stuff, but abandoned this one when it wasn't broken.Plus I'm not a fan of a single mechanic simply for its own sake.


So the next time so f-tard starts squawking about the difficulty of simple math and unified mechanics being superior just point out the can do math. For the older grognard crowd point out that THAC0 appears in their "Ye Olde Holy Book" aka the 1st edition Dungeon Master's Guide written by Gary. But be prepared to save vs, long winded diatribe regarding about how Gary didn't like it.

Dudes... STFU it's in the freaking book, your book no less.