In June 1973 one of the most important comic book arcs of all time came to a shocking conclusion with the death of Gwen Stacy at the hands of the Green Goblin, or perhaps at the hands of Spiderman himself. I was only 4 months old when this happened and would not read the arc until many, many years later while raiding my brother's comic book collection. I didn't really resonate with me at about 8 and it wasn't until I got the Spiderman DVD collection with it in PDF form a few years back and re-read it that it hit home. The second reading was powerful and made a lasting impression. Hurled from one of the towers of the George Washington Bridge and into comic book immortality. 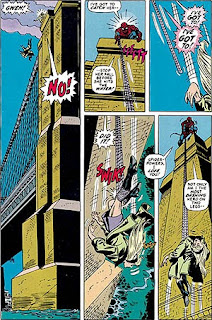 For those not in the know Gwen Stacey was Peter Parker's girlfriend and many contend Peter's true love, not Mary Jane Watson, not Flecia Hardy, not Betty Brant, no it was Gwen. Peter and Gwen met early (The Amazing Spiderman #33) and continued in an on again off again fashion until her death in the story arc "The Night Gwen Stacy died" in ASM #121-122 and its aftermath. The death of Gwen ranks with the Dark Phoenix saga in X-men some 7 years later as one of the greatest story arcs of all time in comics. In short, they just don't make um like they used to. Nothing I've read in the realm of comics would have that much of a cultural impact, even if most people don't know about it. Ins short Ms. Stacy's death in 1973 would set in motion many of the tropes, cliches and over used anti heroes we know today, but more on that later.

Peter would be haunted by her death even more so then the death of his beloved Uncle Ben. With Uncle Ben it was his inaction that caused his death. With Gwen it was his actions that killed her. Uncle Ben's death happened so fast and in Amazing Fantasy #15 that we never had a chance to really care about him to any degree. He was introduced and by the end of that very first comic he was dead. We knew as a reader that he was important to Peter, but he quickly became a deep background figure rather then one of the cast like Gwen. In short Gwen's death impacted the readership in a way that it was impossible for Uncle Ben's to do.

Now its true that the Goblin hurled her from the top of the bridge, not Spiderman. But it was Spiderman's webbing that snapped her neck. This very point became a bone of contention amongst fans for decades until was revealed in the letters to the Editors that there was no way to save her. Even that didn't quell the uproar. At the time the writers said they were surprised by the response (I'm not buying that one bit) so much so, that the original Clone Saga came about due to reader backlash. This in fact became one of the very first, if not the first (and unfortunately not the last) retro-cons in Spiderman's history. Simply put they had to back peddle and still left the reader with an unsatisfactory ending: Peter and Gwen got to say goodbye, but it was bittersweet. But hey the writers could then clear the way and move Mary Jane to the fore.

The importance of this one act cannot be understated as it is considered by many as the end of the Silver Age of Comics heralding the grittier and some would sat more realistic Bronze Age of comics.  I tend to agree with this as never before had a hero failed and failed so spectacularly. In a sense it was controversial then as it is now. Its part of what makes it great: the hero failed. In a sense it is no different then the end of the movie Castaway; we want Chuck to get the girl, but in the end by not going for the Hollywood ending the movie fits better, it feels right its more emotional because of the denial of ones senses of right and wrong. This is the case with Gwen Stacy.

Its also refreshing because in an age of the trench coated, sun-glass wearing at 3 AM hero with major stubble, major attitude problems and a cliched dislike of authority (you know, basically Wolverine) its refreshing to go back to a by-gone age when the hero was actually, you know... likeable. It's laughable that the anti-hero is as much now a cliche as the never fail hero he replaced, but with very few redeeming qualities. But back on point as mentioned: this very incident its what lead to the death of the Silver Age and its attendant likable hero and the start of the much more gritty and realistic Bronze Age. This in turn led to any number of anti-heroes in any number of ant-hero-cliche movies. Many of the directors of these movies have said as much that the Night Gwen Stacy died had a major impact on their writing and directing. Gwen stands as a testament to when the world began to change, at least in comics. 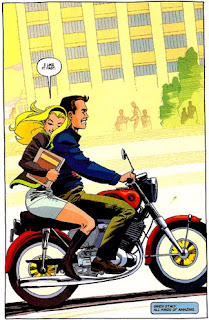 Gwen had and continues to have the the quintessential appeal. The all American girl next door while Mary Jane has always seemed trampy in comparison. Gwen was smart (Chemistry major), a looker (former Beauty Queen of Standard High), fun loving (and who really gained depth in the critical acclaimed (Spiderman Blue Series),  Plus Stan wanted her to be "a lady." Stand wrote her and fully intended for her to marry Peter, he said as much. Thus was born the dresses, the boots and the ubiquitous blackhead band. But by dying young and never being brought back (in any meaningful way) other then flashbacks in the comics she is forever frozen in time. Forever as we remember her without being sullied (The god-awful Sins Past was retro-conned shortly after it came out so I discount it fully; I did when I read it ). There never was the chance for her's and Peter's love to ever suffer the trials and tribulations that Mary Jane's did. Sure they had their ups and downs, but nothing like Peter and Mary Jane later. Her and Peter would forever remain green in the minds of the reader. It's also important to note that before Peter and Mary Jane marry it's the thoughts of Gwen that plague him as if seeking her approval.

Now over the years there has been some lame attempts at resurrecting Gwen and in every alternative history or even in the normal continuity she always gets killed off (the original Kenny McCormick perhaps?) But in the main story line/continuity she forever remains dead, forever a dream, an ethereal one.  That is part of the legend of it: Peter and Gwen were perfect for each other and because she could never been brought back it adds to the anguish of it. I don't think there ever was a more profound shock then her death, not on Peter or on the reader or the comic book community as a whole. And lets be honest here, the story is told through Peter's eyes and the reader puts himself in the place of Peter.

The thing that I find the most ironic about the whole tale of Gwen Stacy is Mary Jane Watson. It's interesting that in the 80's Marvel finally decided to have Gwen, errr... Mary Jane settle down with Peter by finally saying "Yes" after he asked her numerous times. The ironic thing is that the editors basically turned Mary Jane into Gwen... and one has to wonder if that was the case why not go for the real thing rather then Mary Jane? The reasoning was easy. Prior to morphing Mary Jane into Gwen, Mary Jane was the party girl, not the one you marry, you know the bad girl. But in order to have her believable as marriage material they had to change her.  Then there is mash-up that is the first three Spiderman movies, again I ask why make Mary Jane into Gwen? Fortunately things are looking up for the reboot of the Spiderman movies and looky looky, no Mary Jane in sight, but a very capable Emma Stone... playing Gwen Stacy! (Hey guys where is the black head-band! even Straczynski got that one right (acck did I just right that?) 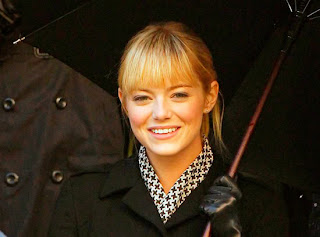 So where does that leave us? Well the comics have morphed so many times into muddled mess that its impossible to tell. With the reboot of the movies they have a golden opportunity to tell a classic tale of love and heart wrenching loss. In the reboot, Emma Stone played Gwen is to be the love interest and they mirror the comics closer they have a chance at cinematic gold, a moment as powerful as Tom Hanks leaving Kelly's house in Castaway. If they tell this story her death at the top of the bridge will have more impact then the half-hearted attempt in Spiderman I.

Do that and you can pick up your Oscars folks.

And as much as we love her, want her back... in sense its not right if its any other way then for her to be dead. If the story line hadn't happened the way it did the whole thing would have been cheapened. If the movies don't go for the same thing and do a rehash of the first movie then what is the point? Somehow Gwen's death wouldn't mean as much, its precisely the ache, the fact that she died that makes the  great. The fact that we know she was perfect. Time may go by but the angst, the pain and the beautiful picture that is Gwen Stacy will never subside. As long as comic book geeks are around there will be ones that remember her, count me as one.

Gwen Stacey, all kinds of amazing indeed.
Posted by Willmark at 11:59 AM 3 comments: