Now that my Chaos Dwarf force is complete (for the most part) I decided to really start painting/repainting my other armies. But before that...

In the past I described how around 1987-89 my high school buddies and I played some amazing AD&D games and a bit later some Warhammer Fantasy Roleplay which I outlined here.

As we transitioned to the later grades in high school we started playing Warhammer Battle, at the time 3rd Edition. For some reason my buddies started playing the game earlier than I. As I would later learn they all picked  different armies so they could ally with each other for larger games. As I recall it was a follows: Jeff- Orcs and Goblins, Dave- Skaven, Pete- Dark Elves, Mike- Goblins? and Daryl had a small Chaos Force featuring Chaos Snakemen. For the most part when I started playing everyone else had largely stopped except Jeff and Dave.

As you can see all of the evil armies were taken except for Undead which didn't appeal to me. So as I started out I briefly played one game with my army as Bretonnian force before converting it to an Empire force. At some point I may post pictures of my Empire army but not now.

So what does this have to do with Wood Elves I hear you say? Glad you asked. Since there was only three of us playing regularly, if we all wanted to play it would be Jeff and Dave vs me! So with an Empire force, what to do? I had to buy and paint my own allies and hence where my Wood Elves came from. In fact my Wood Elf force which would grow to about 1500 pts was just that, an ally contingent that got bigger and bigger. I'm guessing Games Workshop did this but design... Later, my High Elf army would take the same path until it got to be massive, far larger than the Empire force. 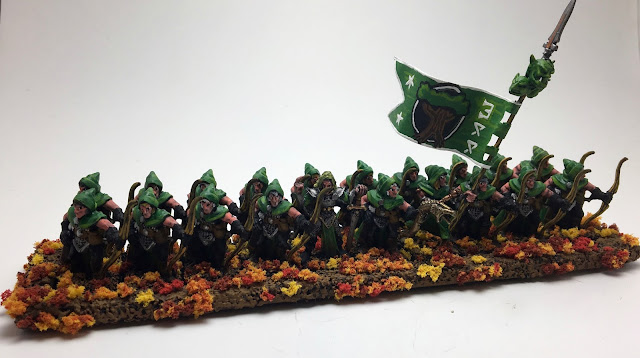 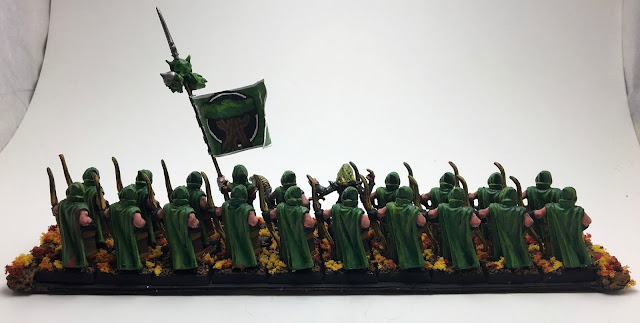 I really haven't set out to repaint my wood elves this last month of so, I was repainting my dark elves, but for some reason I stripped down the Wood Elves and started them up with a unit that was one of my original Wood Elf purchases: a unit of 20 archers from the Warhammer Regiment Box set. I think searched the web, not a lot out there in the way of 3rd Edition Wood Elf minis (painted and presented) that is.

As you can see above I repainted them entirely in traditional greens like their original paint jobs, but wanted to make them look very autumnal. So I stopped at the craft store for some Woodland Scenics clump foliage- Fall mix for the bases and the movement tray. For the first try it's a tad too clumpy despite getting the handle of cutting the foliage it with my x-acto as I went.

So stay tuned for further updates about the rebirth/repainting of my Wood Elf Host. Unlike my Dark Elf army underway at the Oldhammer Forums I think I'm going to keep all my Wood Elf updates here on the blog.