Like a lot of hobbyists I imagine, I have spent the last week and half migrating everything off of PhotoBucket due to their new Terms and Conditions. So that means not much time for actual hobby work. In my case I had most everything backed up, but the Mac that had the photos got damaged in a flood due to an errant sump pump malfunction. So in a few short months it was: lose the local copies of the photos and then the online ones (in a sense). Fortunately, for the Wood Elf thread I chose to place it online here at Blogger (until this too closes- many years from now, right google?)

Anyways, onto the thread: since the Wood Elf host has been growing in size I figured it was time to pause in the rank and file units and give them a leader. For my general I utilized the Ashen Peacemaker miniature that I had procured years ago sans horse and then proceeded to cut apart for a ill-advised attempt at a conversion. What possessed me to do that I have no idea. Fortunately I cut him apart at the points where he was easy to reassemble. 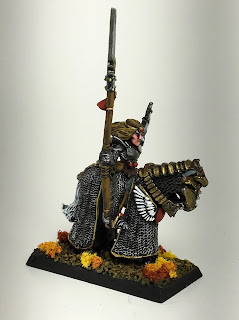 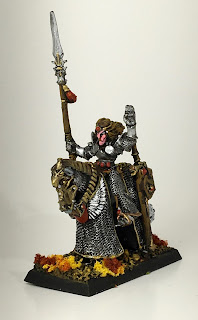 Like the rest of the army he is on a brown base (not the sides obviously) with fall foliage and with the rest of the army I went for a more subdued color scheme. To me this makes sense the Wood Elves are not High Elves; they are not about flash and style, but more rustic and "natural" in their finery.

The horse is actually from another 3rd Edition mini from the Elf6 Cavalry range. The general model it came with is (so far) assigned to the Elven Lord unit im assmebling (see below), but remains to be seen if that is where he stays. I think the crown throws the whole look off for a Wood Elf army to be honest.

As far as my general (I still need to think up a name) there is still a bit of touch up to go on the base and a few other spots. Why is I only notice these after I take photos and prepare the blog post???

I still have not decided whether he will accompany a unit of (so far) 6 Elven Lords or if he will be independent. Of course a lot of this is predicated on what happens with the battle standard bearer of which I'll have mounted as well. 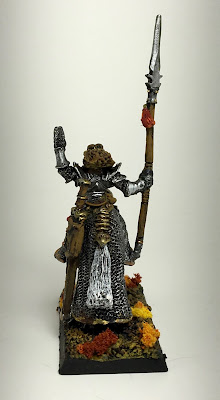 Next up to blog about is my mounted wizard "Milambar Ice Blade". I actually took photos of him too, but noticed that I still need to paint the "ramage" (he has a saddle bag with scrolls). Also the Dragomaster (DRAG7) which I converted years ago with his remounted rider is almost complete too. If that were not enough I have another unmodified dragon that is stripped of its old paint job and primed. As to which army it will go I'm not sure yet, perhaps it will be painted in a high elf scheme...

And further: I still have another mounted elf wizard and a unicorn in need of a mounted female elf wizard.... an elf kin warrior band, two more 20 strong elf archer units, another Treeman, another war dancer troupe, and a scratch built chariot... So plenty of stuff to do with this army to say the least.

I'm still tinkering with the light box (I know, I know, I've been saying this for a while) but have come up with a few good ideas while I get some more lights this week. These photos are a bit better than as of late. I also have been re-reading about it in the web. Seems like that information I knew at one point, but I must have purged from my memory over the last few years.


In any event let me know what you think of the paint job or any other questions or comments.