Getting the drop on the opposition in AD&D, a visual.

After playing RPGs and war-games since 1982 I've come across tons of art; some good, some bad and some in between. Of the old school artists from the early days of TSR are Tramp and Bill Willingham; 2nd Edition artists like Elmore are OK, but I'm neither pro or con for the most part. I've also played a ton of Warhammer (especially 3rd edition) so I'm also partial to art from Games Workshop stalwarts like John Blanche.

But this post isn't about that. This post is about something so over the top gonzo. So over the top that it's epic bad/good. So cool that it is hard to quantify. So of course its something from 2nd Edition Advanced Dungeon and Dragons. I should also note that despite 2nd Edition being my favorite version of Dungeons and Dragons and how I run it (see here) I'm not a particularly huge fan of the Forgotten Realms.

So with that said this nothing short of pure awesomeness. 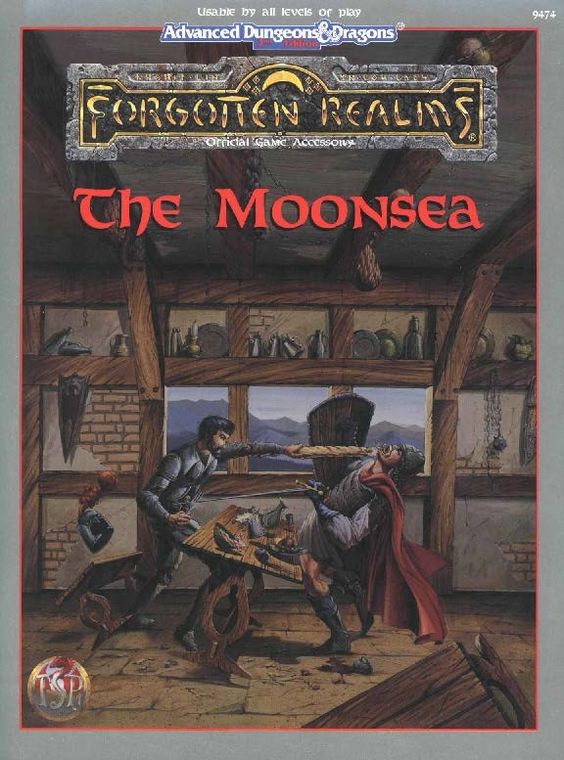 At first I never paid this much attention back in the day: I don't currently have or need the book. But the more I look at it I've come to realize just how gob smacking cool this is! All too often over the years I've seen knights fighting hordes of bad guys ad nauseaum, orcs, thieves climbing demon idols, menacing beholders and mighty dragons on the wing and everything in between.

But getting the drop on some town guard flunky in such an unorthodox way? That's the stuff that legends are made of! And to do it with a loaf of ciabatta bread, left-handed? You don't get much more pimp than this move. Imagine the consternation of said city watchman heading back to the guard tower:

Master at Arms at the Tower: "So, William, did you bring the outlaw scum at the Sleepy Dragon Inn?"

Master at Arms at the Tower: "Why is your face and neck covered with bread crumbs?"

I mean really who's going to own up to the fact that some dude in a tavern got the drop on you with his freaking DINNER! A plate maybe, a hunk of bread????

You might loathe 2nd Edition AD&D, you might not like the art (I've certainly seen better) you might not like the subject matter. But when is the last time you got the drop on someone in the game with one of your characters utilizing a loaf of bread? I'm guessing never.
Posted by Willmark at 9:52 PM 1 comment:

Like a lot of my 3rd edition models these guys have undergone many paints and then subsequent repaints. As I noted during the initial post of this topic I had to paint a lot of models quickly back in the day as I was the only player of "good" armies; meaning in larger battles it was always me, allying with... myself. So being an Empire player primarily back then meant Wood Elves as an ally contingent.

I was fortunate enough to grab a box set of Skarloc's Woof Elf Archers around 1989 (the box is long since gone.) Their initial paint job was rushed quite a bit, I don't remember much by they were obviously clad in a lot of green. The second repaint left them likewise green but still rather flat and using 5th/6th edition shields.

For their last (hopefully) repaint I took my time. I actually finished them about a month ago but with a two-week vacation I'm just getting around to posting this. As you can see I went with the same autumnal feel for the color palette I've been using for all of my reborn Wood Elf force, along with appropriate flock.

The photos are bit yellowish as I've been having a hard time getting to the store to get natural light bulbs for the painting/photography area. 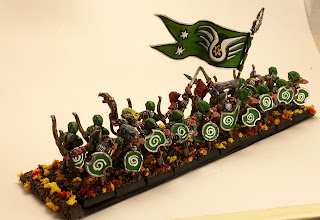 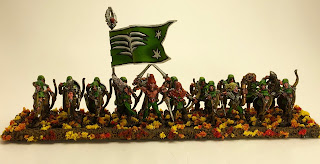 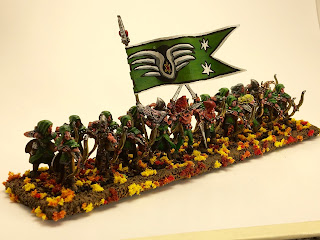 Overall, I'm pleased with how they came out. For the shields I opted for a simple white swirl pattern which I had for several painted Glade Guards. I echoed the color on the banner which is a stylized pair of wings.

Next up is a Treeman which is almost complete. Until next time.
Posted by Willmark at 7:48 PM 2 comments: