Power, Mystery and the Hammer of the Gods

I've written this post in an on again, off again fashion for over two years as it goes off the beaten path of the blog as it were... But I feel compelled to blog about it anyways (Hey, its my blog), hope you enjoy my musings.

"Power, mystery and the Hammer of the Gods" is a reference to an answer Jimmy Page gave to a searching for just the right photograph, of the band and to me (and a lot of others) that sums up the mystique of Led Zeppelin*.

Absolutely true. To me they are THE band. Led Zeppelin is the best band then, the best band now, the best band there every will be. And the kicker? I was 7 when they disbanded. I never got to see them on stage, but I am a huge fan none-the-less.I started as a fan back around 9th grade. I big influence was by buddy Jeff who was and is a big fan back then too.

The band was and is legendary. To say I'm a huge fan is an understatement. The abilities of the four are definitely greater then the whole, and taken as a whole, the whole is greater then the sum of the parts. They complemented each other like no other musicians I can think of. And because of this is why I think they are the best rock and roll band of all time.

With the Beatles, the whole was greater then the parts in my opinion, with Led Zeppelin, both the parts AND the whole are greater, and that's saying something. They were and are greater then anything before or since. I don't know if we will ever see its like again especially in light of the state of music today.

An interesting part to their storied career critics hated them (still due to a degree), were rarely on radio (initially), had no number one hits and yet were still the biggest band of the 1970s. That geriatric rag Rolling Stone still is dismissive too them to this very day. But as Gene Simmons put it so ever so eloquently when speaking of Rolling Stones' dislike of Kiss: "Being accepted by aging hippies is not high on my priority list."

Led Zeppelin's albums and their live shows made them. It would only be after they disbanded that they reached a near mythic status. That and the fact that for the next 25 years every band tried to be them and to sound just like them. Try turning on the radio and not hearing Stairway to Heaven at least once a day from 1980 to 2000, or even now.

In the end it, was perhaps fitting that they called it quits after the death of John Bonham, they had given us 12 years of dominance and never really faltered to any great degree. Like Henry V's short reign as King of England in the early 1400s, Zeppelin burned bright across they sky, like a comet. They didn't have any time to be bad.

And I leave you with what might be their greatest song in terms of range (hard to argue with Stairway, but...)

As Zeppelin famously said in a great song: "Then as it was, then again it will be".

Postscript: In the time I took to write this blog-post, a new band has come along that echoes Zeppelin, Greta Van Fleet. While not exactly Zeppelin there are a lot of influences and aren't direct copies like Kingdom Come (Kingdom Clone). I like them a lot and look forward to seeing what they come up with. Their 4-song EP is excellent and highly recommend it.

* I'll add that while I'm tolerant of free speech to a large degree, I'm not entertaining trolls about Led Zeppelin. If you want to rant about lawsuits and plagiarism? Do it elsewhere. Want to discuss why you don't like them, fine, hurling the crap of plagiarism? The web is a wide-open place. I'm sure you can  find other places to do so.
Posted by Willmark at 12:00 AM 3 comments:

Email ThisBlogThis!Share to TwitterShare to FacebookShare to Pinterest
Labels: Greta Van Fleet, Led Zeppelin, Mystery and the Hammer of the Gods, Power

Back after a ton of summer activities with the kids. While all those activities were going on I wasn't complacent in terms of painting. In fact for summertime painting I got quite a bit done.

This next guy, the ever cool Dragon Master from the Citadel range (notes here). Like the rest of the Wood Elf force this particular model was purchased not for a Wood Elves per say, but yes, you guessed it: an ally for my Empire force in 3rd edition. This purchase represented the start of my High Elf force  which in years would number 14,000 pts. I quickly painted the model up and his debut was against Jeff and Dave's forces (Orc and Goblins/Skaven respectively) during the Ice Storm of 1991 at Dave's house. Since it was just me on the other side I played a combined Empire, Wood Elf and High Elf force. I don't remember too much other than we setup the board on the front living room floor as the power was still out, nor who won. I do recall however they were conspiring to knock him out early, as in like round 1. So against all odds I won initiative and charged across the board and got him into hand-to-hand combat. Don't remember what happened after that, but pretty sure I spoiled their casting of Windblast or Hurricane. 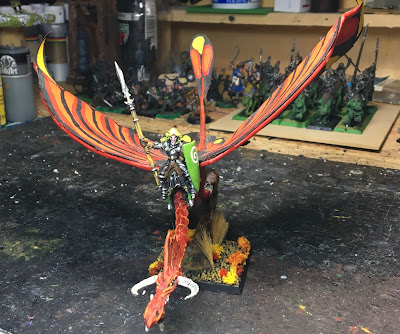 After that Jeff more or less stopped playing so Dave and I played a lot more. This particular dragon would end up as a general for my High Elf force, joined by another Dragon Master model as the army standard bearer and 4 more dragons. The cool thing about the High Elf force in 3rd edition is you could field a force made entirely of dragons which I did a few times. The downside was at 315 points the +4 Shock Elite Dragonkin riders only had 1 Wound...

After moving to 4th and 5th the model sat for a bit until I stripped it of paint and redid it into the form you see now. I made the butterfly wings from regular painting canvas that I cut out to the right shapes and stiffened with successive coats of a watery glue. A small wire forms the leading wing edge to give it additional support. The odd thing was that I modeled a saddle and plunked a 4th edition Empire Rieksguard knight on it  Not sure if the mini ever saw combat in that form.

Since getting back to Oldhammer I've been reassigning models to their proper place in the army lists and it just didn't really fit with the Empire, but I didn't want to trash the dragon. So I touched up the paint job and put the original elf warrior and saddle back on. Upgraded the base to a 50mm base and Bam, done. Moral of the story? Never throw anything away! 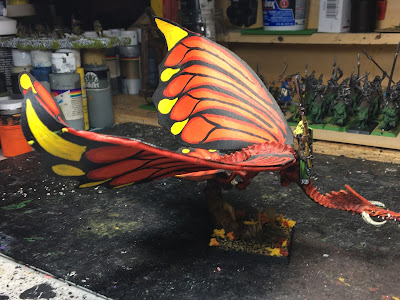 So with all that he really wouldn't fit into my High Elf force either with its blue and white paint jobs. What better place to assign then my reborn Wood Elves? Adding fall foliage and once again ties it all back in.

Next up? I'm still looking for 9 more wood elves from the plastic Warhammer Regiments set for two more archer units (I have 31 now, so two units of 20 is the goal). I did pick up 2 more 4th edition Glade Guard models which I'm using for my Kinband Warriors. I don;t know why but I like these models a lot. They might very well be next as I now have 2 archer units, 1 wardancer unit, a wizard, general, treeman and now dragon rider painted. the force continues to be reborn!

Adding to all of this I'm also working on my reborn 3rd edition Dark elf force and have just finishes a unit of 10 Dark Elf Dark riders. (and yes, you can see some "under the brush" Cold One Knights in the background).

So stay tuned.
Posted by Willmark at 1:23 PM No comments: