Kiss - "Who sails the ship through stormy sea? 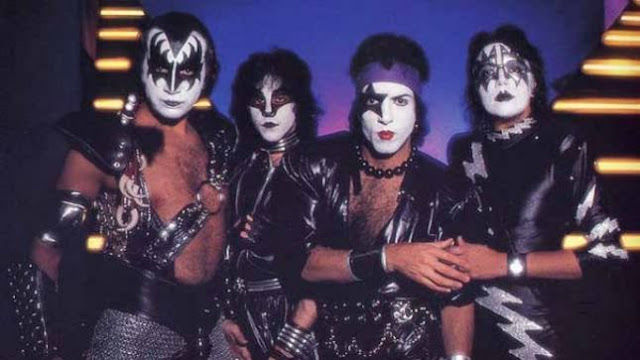 My favorite band is Led Zeppelin as I outline here, but another band I'm a fan of that the critics hate? KISS! And one of their most, if not their most misunderstood album to date: (Music from) the Elder. Its worth noting before going further, that at the time that the album was released it seemed to be the soundtrack for a non-existent movie.

Before you cringe, KISS was in my oldest brother's age-range/wheel house when they first hit more so then they were in mine in the later 70s and early 80s. The same brother actually had a few of the albums in the 1970s: Alive! Destroyer, Rock and Roll Over and I believe Love Gun. I played them on my record player in the late 70s early 80s, but they were never mine. In fact I never actually owned an album back then, it was cassettes then to CDs. Sadly those original albums as long gone. I can remember drawing for long hours my version of the cover of Destroyer because I thought it was so cool.

The same brother and I did get to see the original band members in 1999 during their Reunion Tour which was very cool and I got the 5-disc box set a few years later. Crazy to think even that was almost 20 years ago! So whats my point? Rather then dissect their musical chops (or lack thereof depending on which side you fall) I'm going to talk about (Music from) The Elder... I know right? Like many people I've avoided this album for years, so have the critics, the fans, and even the band itself, but is it that bad? A year or so I got it and listened to it. Here is where it gets crazy, its better than one might think. But as Ace said in hindsight: "the wrong album at the wrong time." And when Ace is the voice of reason???? Crazy!

So, a  concept album from KISS? A Prog Rock album from KISS? Let me say there is actually some good music on The Elder which is surprising to me. Like their  previous album Unmasked there is some good songs (I'm thinking "Talk to Me”, “Tomorrow”, "Two Sides of the Coin" and "Torpedo Girl"; ironically all the songs that begin with T and two are written by Ace Frehley!)

And how does this fit to the theme of this blog? Think about it the imagery that this conjures up? A boy sailing through a stormy sea to become a hero? Trite, simple and cliched, but "Just a Boy" is a great song, certainly a curve ball, but a good one. Its really no different than the imagery of say Jethro Tull's "Broadsword" which I like as well.

The singles were "I", "A World without Heroes" and "The Oath" which are fine for a soundtrack, but not really geared towards commercial radio airplay (see below on "A World without Heroes.") In fact "Darklight" should have been the lead single. It was written by Ace and doesn't really fit with the album, but is probably the most geared towards radio airplay. It also really doesn't fit with the rest of the album in my opinion either.

"Under the Rose" has a unique sound with echoes of a chant and "Only You" is surprisingly catchy. That leaves "Odyssey" and "Mr Blackwell" as the weakest on the album, but I'd also include "Heroes" here as well. Its a sort of wishy-washy to me personally, but your mileage may vary.

To close: While Prog Rock AND KISS might not be everyone's cup of tea (and ironically Im drinking tea as I finish this), the fact they do go together well in this effort. After listening to Pink Floyd who I like its a nice diversion to listen to this among other Prog Rock.

As a last note: the album was not liked all that much by the band themselves and did not tour to support it. Years later with Thommy Thayer and Eric Singer in the band in Ace and Peter's makeup (I refuse to call them the Space Ace or the Catman) they would play some of these songs on the various KISS Cruises or later tours. But for years it was an afterthought.
Posted by Willmark at 3:12 PM No comments:

Email ThisBlogThis!Share to TwitterShare to FacebookShare to Pinterest
Labels: (Music from) The Elder, KISS, Rock and Roll, Rock and Roll Over, The Elder
Newer Posts Older Posts Home
Subscribe to: Posts (Atom)