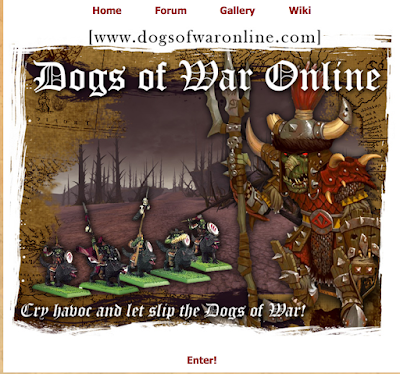 I've been spending a lot of time dusting off the forum over at Dogs of War Online After years of neglect in my very busy life, the forum has been updated to the new version of MyBB, the CSS theme updated and new features added to the site with the Wiki and User Map functions updated as well.

Now, this may seem like a fools errand as Dogs of War was/are probably the least supported army for Warhammer Fantasy Battle out there and with the changes to the game via the Age of Sigmar, but... I look at the situation as no different then the state chaos dwarfs around 2007. For years we had a very vibrant community and were quite content to create tons of material on our own all free of GW, now that is even more magnified. Warhammer Fantasy Battle is now free of GW stifling anything they don't like, the community can really create what they want.

So with all this said the site has been dusted off after years of neglect from me. We still have a small cadre of folks who post there but are looking for more, to build up the community of like minded individuals. But its not just Warhammer or even Dogs of War, stop by and participate in the OT forums, discussions of other RPGs even. So whether you pay Kings of War, Age of Sigmar or 9th Age or even some other war game, stop on over.

I'm still an administrator over at Chaos Dwarfs Online and in a lot of ways we're "sister-sites" of a kind, sharing similar goals and outlooks. But given my newly freed up time I figured it would be best to devote my time to building a great community at Dogs of War Online as well.


As a personal note: its the only place you find my army blog as I assemble my force of Nippon using 2nd/3rd edition rules. I've blogged about Nippon here and here, as I've wanted a Nippon force since the late 80's and have been working ever so slowly to assemble one. Now with my renewed interest in Warhammer it's really gathering steam now. I'm building the force under 2nd/3rd edition rules, but I'm also looking to configure them to be able to be used in Kings of War, and 9th Age, possibly even as a 3rd edition "Count As" Empire force . Or even a 5th Edition Dogs of War force! Sky is the limit.

So as the bard said "Cry havoc and let slip the Dogs of War!"

Posted by Willmark at 6:52 PM No comments: