Oh Yeah, that other area of Wargaming- Terrain

(Grrrrrr.... Once again my love/hate relationship with Blogger continues as this hosting platform ate a large portions of my changes to this post and for whatever reason auto-save did not work....)

As summer turns to early Fall here in North America I take a pause from my intensive construction of my Warhammer Nippon Castle and the start of Castle Von Wittgenstein. (as well as numerous Warhammer Fantasy Battle units for various armies) I got to thinking about the overall amount of time that I and I suspect others engage in when it comes to terrain. It is my contention that there probably isn't as much compared to actual painting and assembly of miniatures which is to be expected.This in a way is a sad thing because one of the most rewarding areas of the game in my mind and in way one of the cheapest is terrain. Certainly when one considers the cost of Oldhammer; i.e that almost any miniatures have to be purchased off of eBay and not so nice prices, terrain is cheap in comparison.

When I say lack of terrain, I'm not saying there was none in our games, but rather a decided lack of attention to it  to a large degree. By this I mean buildings, forests/woods, rivers etc,were present, but not large scale projects I mentioned above. Even back in the day when 3rd Edition was the current edition of the game, I don't recall creating as much terrain compared to the gold standard of what we saw in White White Dwarf. Sure, in my gaming group we had the main board (cut into 12x12 sections for ease of transport), some trees, hedges and fences but not much else. Buildings were taken care of by the Warhammer Townscape book, but none of us attempted to create more elaborate pieces. 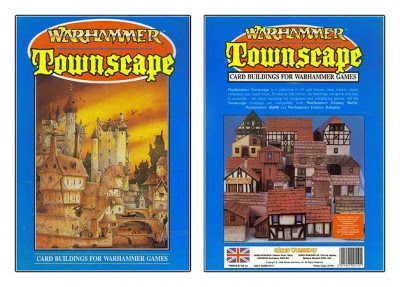 As an aside: over time I purchased another Warhammer Townscapes Book years ago and since I inherited our old terrain as a gaming group I reckon I have about 1.5 sets of buildings from the two books. I say 1.5 because despite this I don't have all of the buildings due to various moves and some being destroyed over said time-frame.For those not in the know, Warhammer Townscape was a book of card-stock buildings that one folded and glued, looking like this =>

For me the lack of terrain is odd when you consider the totality of the hobby. Even though I saw some of the excellent buildings created by Dave Andrews in various White Dwarf articles, it wasn't until after the heyday of 3rd that I really started constructing my own buildings. But a funny thing happened when I did I start creating them, I did so in a style very akin to 3rd Edition. This is probably not as "funny" when I think about it, for example (Willmark's Homemade Warhammer terrain)

Now, I posted these years ago on Chaos Dwarfs Online and are a slection of some of my terrain and the the style is distinctive, atat the same time familiar. But even with these I still wasn't doing anything too new, as a lot of the pieces were right from White Dwarf (not that its a bad thing).