On a whim I decided to reread the Dragonlance Chronicles, specifically Dragons of Autumn Twilight after buying the trilogy for less then $5 at a local bookstore. Over the years I’ve shied away from rereading books I originally read as a preteen or teen, worried that they wouldn’t hold up, especially
after reading the Game of Thrones at least three times now. But, I have to say I was pleasantly surprised and the read thus far has been fast. While its not the best series ever it wasn’t horrible.


As I write this post I’m now already onto Dragons of Winter Night and despite knowing the story I’m pleased with it. Returning to Dragonlance is the first fantasy I’ve read in at least five years, or in this case reread. About the closest I’ve come was reading the entire Camloud Chronicles (also known as Dream of Eagles outside the the US) by Jack Whyte. I’ve never been a rabid fan of Dragonlance, but certainly not all butt hurt like the neck-beards with their 30 year jihad of “Dragonlance ruined AD&D!” It was an interesting concept, novels that beget a series of modules. 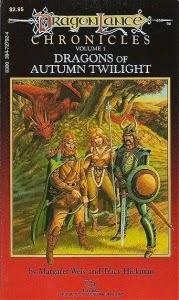 Reading Dragons of Autumn Twilight was a quick read. I found myself getting immersed in the story and enjoying the fact that the chapters went by quickly (for me these days time is a premium). At only 441 pages it was a snap to blast through them. Epic fantasy is also something I haven’t read in a while so it was a nice change of pace. The authors Weiss and Hickman did a good job of moving the pace of the story along. One thing that struck me this time around a number of the characters come across as whiny, particularly Flint and sometimes Tanis. I also cringed when I thought I’d dislike Tasslehoff but didn’t find him too irritating. Sturm is a bit of a downer, yes being a dour knight and all and Raistlin I found just right, squaring him with my memories (see below).

I’m also finding I also have an odd sympathy for Gilthanas, perhaps knowing what is coming. Maybe this isn’t surprising as my all-time favorite character class is fighter/mage (or in 1stedition parlance- fighter/magic user).

Now back in the day my gaming group and I read  Chronicles (most of us grabbing the same copy from the public library), but I don’t recall any us rigidly adhering to the books when playing the modules except for maybe Jim wanting to role-play the death of Sturm (also see below). I also don’t recall if we got that far.

When we played Dragonlance back in the 8th/9th grade days we only played a few of the modules. One distinct memory I have is of arriving later then everyone else at Jeff’s house, descending to the basement where we were playing and everyone having a grin on their face… I also remember why I was late and why they were all grinning. First, I had a football game and rushed over to play so it would have been the fall, in fact I still had my lower football pads/pants on. I’m sure I must have smelled great (gully dwarf?) Second the reason why they were grinning: As I was last to arrive everyone else had already picked their characters and back then the group was slightly larger then the core of: Jeff, Dave, Daryl, Jim, Christian, Tom, Mike, and I. So guess who I end up with by random chance? Raistlin. At first I was not happy, but in fact he was quite fun to play. It was fun to play a sarcastic, scathing mage with a big fighter (Caramon) to stick up for him. Dave may have been playing Tasslehoff, Jim was probably playing Sturm. After that I can’t quite recall. This also may have been the second time they played through it as I recall. This is a bit murky as they played together as a group when they were kids; at least 5-7 years before I joined them.

So there you have it, to reiterate I’m not a huge Dragonlance fan per say; it was fun to play, and my personal demarcation line stops right at Dragons of Summer Flame,  (which is another story altogether). A few Dragonlance ideas have made their appearance in my games and overall I like the concept of the world. As an aside: draconians are a good bad guy especially when orcs are overdone.

A few years later we returned to Dragonlance for a few all-night games at Jeff’s where I played a dwarven paladin of Paladine named Duncan Steelmountain wielding a magical battle-axe called "Gutripper" (I still have the character), Dave playing a Minotaur and Daryl playing an human magic user. This is also interspersed with us watching Hellraiser those evenings. Unfortunately, there are no notes listing the other player characters names*. This would have been one of our last 1st edition games right before we switched to 2nd edition.

* Edit I found the character's "back story" (and it is horribly written by me) but does contain most of the names of the player characters from this second Dragonlance campaign, so the roster is as follows:
- Me (Mark): Duncan Steelmountain, mountain dwarf paladin of Paladine**
- Dave: Tolon (or perhaps Tolor) a minotaur fighter,
- Jim: Zachariah Stormgren, aspirant to the Knights of Solomania
- Daryl: Siward, a human magic user (no mention of which robe color).
- unknown player: a kender handler named Gidenan
** mountain dwarves may be paladins in the Dragonlance Adventure book.

There you have it. Reading Dragons of Winter Night now and 399 pages it should be a snap to read:  Light, fast  reads these days fits my busy life and these are certainly that.