Exclusive news here! I have finished the layout for Gold and Glory #4, the ezine of http://dogsofwaronline.com/


In the coming week I hope to have this one out by Friday next week as I'm getting well into Word of Hashut #9. That will be a blog post for a later point and is going to be a great one.

Good to see just who is reading/following this blog. ;)
Posted by Willmark at 7:48 PM No comments: 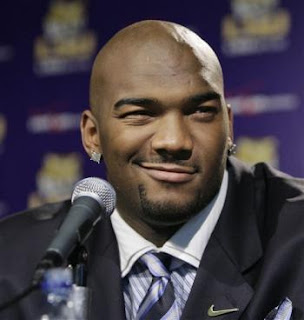 I'm going to take the opportunity to thank the Sith Lords for finally cutting the worst, and I mean worst quarterback ever to disgrace himself in football. The Oakland Raiders and us the long suffering Nation can finally move on from this complete and utter craptastic "QB". Really, now the debate about who was worse: Ryan Leaf or JaMarcus can begin. For a comparison see below.

I was against this tool when the Raiders drafted him in 2007 and so was Lane Kiffin, not that I was a huge fan of his either They could have drafted anyone , but no they had to take him #1 in the draft.

In retrospect this "QB" set the franchise back years by his in consistent "play". Fortunately the Crypt Keeper (Al Davis) finally wised up and cut ties with him admitting the mistake.

One of the more amazing things is what he got paid 39 million dollars to win 7 games... to put it into perspective: http://espn.go.com/espn/thelife/salary/index?athleteId=5142920

How depressing is that?

Even more amazing for JaMarcus Russell, he "earned" $110,000 per completion, 2 million per TD pass, 5 million per win... if that doesn't suck I dont know what does.

So let the debate begin and there have been some truly horrendous QBs to "grace" the NFL over the last 20 years: Akili Smith, Tim Couch, Todd Marinovich, Andre Ware, Rex Grossman, Dan McGwire, Kelly Stouffer, Danny Wuerffel, Jim Druckenmiller, and Heath Shuler to name but a few (Cade McNown, Rick Mirer and Joey Harrington) are question marks to me in a lot of respects.

And there are even more when you look at the NFL over the last say 40 years, but at the top of the scrap heap? Ryan Leaf and JaMarcus Russell with JR being #1 in my mind.
Posted by Willmark at 8:25 PM No comments: 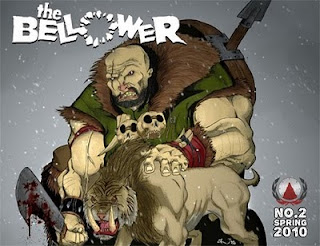 The Big flabby, guts over at Ogre Stronghold are back at it again, and this time with the latest release of the Bellower,. The Bellower being the the ezine of the excellent Ogre Stronghold website. As one would imagine (but for the benefit of those not in the know) this is for the game of Warhammer, specifically the Ogre faction of the Warhammer World. The Ogre Kingdoms site can be accessed at: (www.ogrestronghold.com)

In much the same way the production delays seem to plague the Word of Hashut the Bellower got out a bit later then last time, not that I know anything about that...

For layout it is in the horizontal (landscape) format again and that is fine. To me personally its immaterial as my laptop is often hooked up to a large monitor for reading or I read them on my home desktop and a 24” screen…

There are no real noticeable production glitches and being the geek that I am I noticed that the ezine was created in Scribus which is open source; that would be my choice if I did not use InDesign on Gold and Glory and The Word of Hashut so kudos there. Why would anyone check this you ask? Because if you create these things you winder what someone else is using that’s why. Scribus is freely available from here: http://www.scribus.net

First off the good things that I liked or noticed as I read through it
Great job on the cover. A good looking cover is a necessity for ezines in this day and age. In a world of increasing ezines its harder to stand out unless there is a good cover, this one fulfills those requirements. The cover also ties in nicely to the content inside. It shows that the Bellower Staff is looking at theme rather then a random picture on the cover that has only marginally meaning to the contents.

I enjoyed the focus on the Trapper. It’s always nice to see articles that challenge the status quo of thinking for a particular army, whether it’s from the theoretical or a necessity. All too often many Warhammer players cant get out of their rut. I think those that don’t play “Point and Click armies” are able to do this better and such is the case here. Also the Trapper article was well laid out and an easy read. A few more graphics and/or pictures might have helped it “breathe” a bit more as the last page of the article felt a bit cramped in terms of its space.

I also really liked the recap of Animosity IV, this is a great example of a short, concise article that gets to the salient points quickly and is an easy read. Great job here Mercules.

The Saber step-by-step guide: It was well laid out and and clear about what steps you were doing. In short a great guide for a newbie to follow. A few bigger pictures showing the painted goods might have gone a long way here.

I like the look of the ezine with varying shades of gray; it breaks up the pages nicely. With that said see my comments below about improvements. Also the flip side of prolonged usage of white text on dark backgrounds is eyestrain. This issue has a lot of reversed type. The flip is to beware of too dark of a background with black type as it can blend.(Of course this blog is black and white but I keep the posts short(ist).

Things to work on
The next step for the Bellower Team is to step up their game and to attempt an ezine in full color. The (largely) black and white layout/theme is well executed and looks great, its also fun to do once in a while but for the sake of variation its good to add more color. This is more difficult to accomplish but worth it to give it a try. This is more of a style thing, not that anything is wrong.

I noticed a few typos here and there; nothing too major and I know how tough it can be to catch them all.

Careful use of the text wrapping tools! I know for a fact how tricky this one can be. The fact that the software can easily wrap text is great. The downside is that it can produce tight text to an object or even weird separations or gaps of the text. When finished its always a good idea to have someone else look at it who has a fresh set of eyes: after looking at it for months you tend to fill stuff in mentally, I know I do.

From the layout perspective the Painting Competition article was a bit unfocused. What I mean is that it was not always clear looking at it what won what placing in the competition. I know I did a double take a few times here and there. Once I looked it over again I can see where the idea was going but it seemed a bit disjointed.

The back cover is a minor point but an important one. The back cover sets the tone for the next issue and also gives a sneak peak as to what’s coming next. Now how this goes its likely that someone was supposed to do it then “something came up” forcing Randroid to scramble, not that I would know anything like that.

If you are looking for a great read that focuses on the flabby mercs of the Warhammer World then these are your lads and this is your mag. There is nothing bad about the issue at all and overall I'd feel comfortable giving it a 4 out 5 rating, easily. All in all a fine effort from the group here and all around its nice to see an improvement from Issue 1. Congratulations on the good work and keep it up.