One of the coolest things about 3rd Edition Warhammer are the rules for Allies and Mercenaries. While not perfect, I think they are the closest they have ever come to being truly playable in the various iterations of Warhammer.

This post is about the Old Worlder Mercenary Contingent, but first a bit of backstory.

As I noted here, my very first step into Warhammer Fantasy Battle was in 3rd Edition. Since the other guys had already picked armies and we didn't want to duplicate any one army I had a few choices to go with, all on the "good side". I had always liked knights back in the day so Brettonia it was. A few stops at the local games stores left me with the following for my very first games (around1988)

I only ever recall playing against Dave's Skaven before converting them to an Empire force which would become my first real army. Jeff had some he sold me some Empire halberdiers I think to bolster the force and aide the conversion of the army. As knights of the Empire I used epoxy glue to add aluminum foil to paint barding! Ugh. The lengths we went through to make the models WYWIWYG. Nowdays I could pull it off with green-stuff but back then my skills at modelling werent so good and no one knew what green-stuff was.

After a while my dislike of all things Bretonnia grew as well as eventually creating three 10+ units of Empire Knights which the need for Brettonian knights standing in as Imperial ones diminish. Even so, I bought some 5th Edition Bretonnian horses a number of years later repainting and remounting the knights; and then promptly did nothing with them. I was fortunate in that I did save the original horses having a vague idea of using them as steeds for a paddock and stable terrain piece. A casualty of them sitting at the bottom of various bits boxes for years was that almost all were missing their tails. No big deal as I recreated them with green-stuff that came out quite well. Moral of the story: never throw anything out!

Now this brings me to the present. A month or so back I stripped down the archers and primed them just for the Hell of it. But in doing so I got to thinking. About six months I have reassembled one of my Bretonnian cannons that I saved the frame for 20 years (the barrel was part of a crappy home built steam tank, now since destroyed). Did this mean I was going to reassemble my Bretonnian? No. With a perusal through the 3rd Edition Warhammer Armies book it became clear it would be more fun to paint them up as scummy mercenaries! This has the added benefit of the fact that I'm the administrator of Dogs of War Online, homeland of mercenaries!

A few nights of stripping paint, redoing horse tails and finding shields and were all set. Note the shields will be repainted; some of them sport their crappy 1988 paint jobs. Paint jobs reflective of me not knowing what the Hell I was doing back then..

So now the force becomes:
* Yes, the rules say a maximum of 20, but I'm not too worried about the 3rd Edition Warhammer police breaking down my door at 2 AM for rules violations....

** Perry miniatures obviously, seamlessly integrate with the other minis. Minis from the Foundry line are another possibility.

So with that I'll have a nice, tight Old World Mercenary force. In a pinch they can shift to an Old World Ally Contingent as needed or even a small Bretonnian force (yuck). The only downside is that only Empire, Bretonnian and Dwarf armies can field Old Worlder Ally and Mercenary contingents...

As an aside, I also now have enough minis from the various armies to field almost all outside of pygmies, Skaven (I have some but not a lot) and Fimir. My ultimate goal is to have enough to field all these! But for some reason Old Worlder strikes me as cool as I haven't really seen any truly dedicated forces on the internet. And that's my goal to have enough dedicated minis rather than always pulling from the main army.

Last part for those wondering- yes I'm still working on my scale Castle Von Wittgenstein and my Nippon castle. In fact I'm working on a ton of stuff and going wherever my muse takes me! Its a fun ride, updates over at Chaos Dwarfs Online and Dogs of War Online.

Death on the Reik- Scale Model of Castle Von Wittgenstein 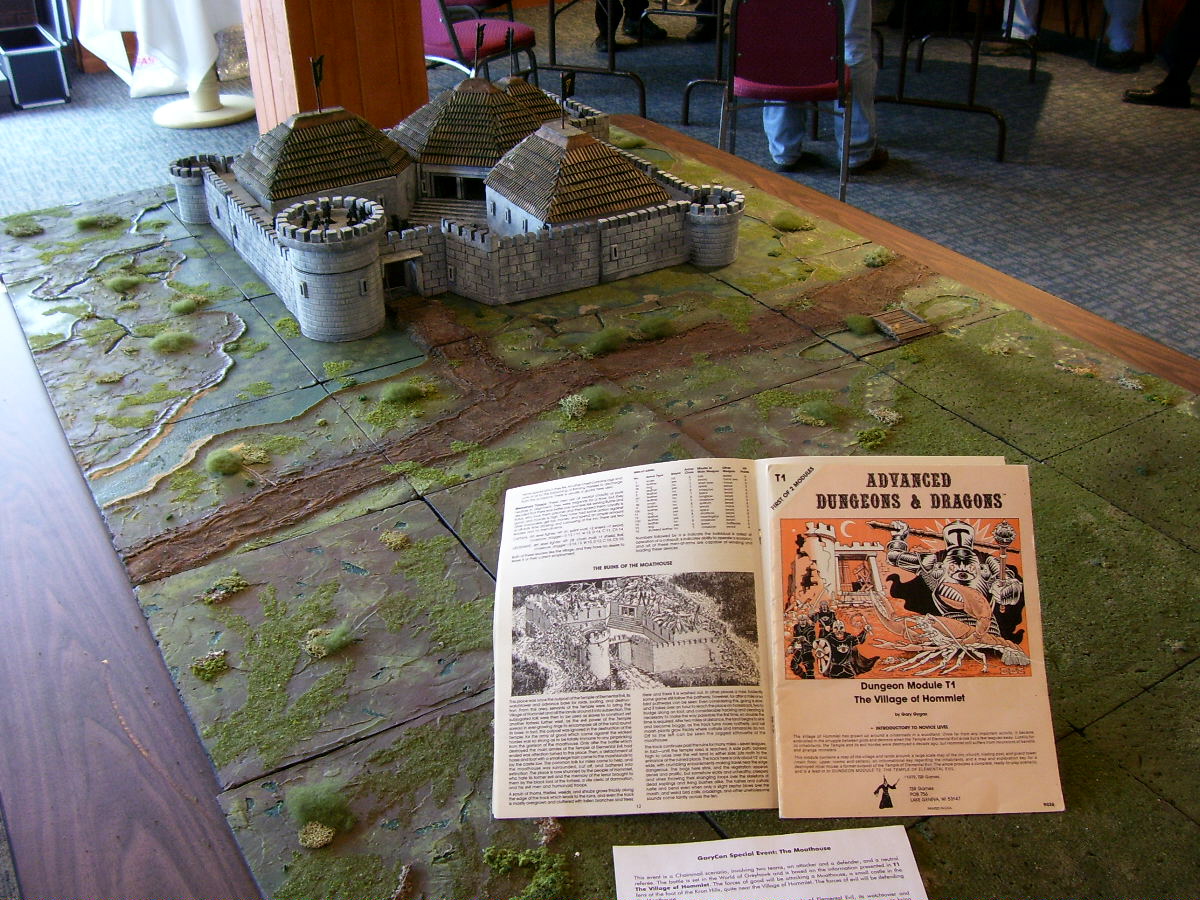 What got me thinking about it is this:
T1 The Village of Hommlet was a classic, seminal module for many and the Moathouse (meat grinder thought it was/is) stands a indelible image of AD&D. I think for me it would be fairly easy to do something like this, but its already been done as it were. And I should add its an excellent model all around so no need to do it again.

So with that in mind, my thoughts have started to coalesce around this, a scale model of Castle Von Wittgenstein from Death on the Reik. 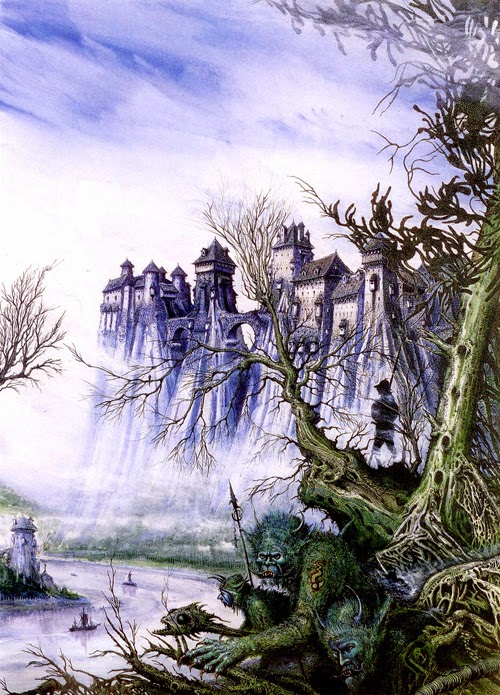 I don't think anyone has ever done something quite like this in terms of an old-school module as a terrain piece, that is in WFRP terms.

Now, I do have the module (obviously) but one thing I'd have to decide early on is which route to go. What do I mean by that? The floor plan/map is not the same as the art which is to be expected. 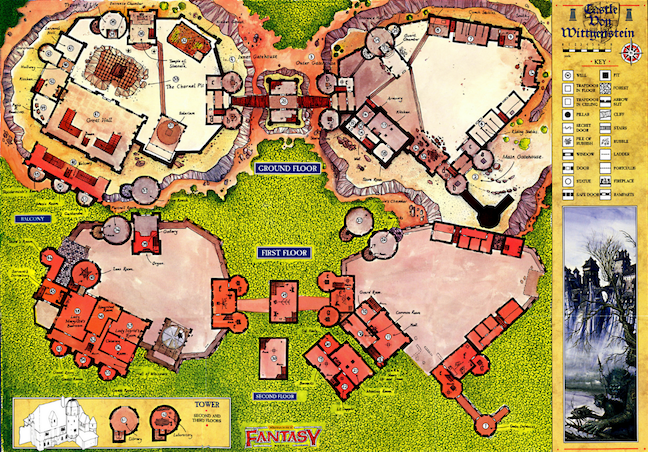 The tougher route to go with is the art because its just that one picture from the cover and the backside not shown would require some guess work based on the map.

NOTE: I've posted this a couple of different places (Chaos Dwarfs Online and the RPG Site) to gauge interest/ideas/feedback.

Right now this is in the idea phase only.
Posted by Willmark at 11:50 AM 5 comments: