Just like the fortifications of Normandy at the end of the Dark Ages a fortress in the mold of robber knights looms from the forests in the World of Warhammer? (more on that below). But indeed a wooden palisade filled with mossy beams and wooden stakes to ward of would be attackers and a fortification of an earlier time..

I know I said in a post in December that the next castle I create will be something akin to the Warhammer Mighty Fortress from days of old. While that is still true, I also decided to finish this up from its start nearly one year ago. 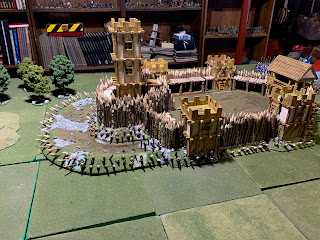 The fort you now see started out as nothing more than me noodling around with my glue gun, x-acto knife and a punch of sticks whittled to points to represent a palisade. I really had no other plans than testing it out and trying a few things with the Sculpey modeling clay to see how it might set after being baked in the oven. Nothing spectacular were the results and it sat for a bit.

Then for some reason I started adding more and more and constructed the gatehouse which was the most time consuming and he towers with the basis of them being 1/2 gallon milk carton. From there I continued to add as it came into my mind and based on a motte and bailey construction type of Dark Ages fort.

After the first wall which was nothing more than the initial twigs sharpened and glued I realized that due to the curves of the sticks I'd need to double it up, so the second row was added. From there it was a simple matter to glue in the supports for the walkway and cut the sticks to fit and then length wise generating two pieces each to glue to the platforms. The base against the bottom of the walls switched from the a fore mentioned clay to the R4 foam. After that it was a simple matter to glue down the rocks and stocks and add the wooden stakes. I say simple but to be honest it was very time consuming.

The towers were constructed much the same and as I noted above 1/2 gallon mil cartons that I cut down to the correct size. Once it was the right size I added the bass wood to each corner and glued it down to the base. From there it was just adding the horizontal parts and a heck of a lot of Popsicle (craft sticks) cut down to size, round ends snipped off and sanded. I came up with the idea of the beams jutting out after I had completed the tower construction so unfortunately I had to cut, sand and glue each one individually. That was almost as time consuming as whittling the palisade walls.

The gatehouse was probably the most complex part of this project. The roof is removable and was designed that way from the start. The bigger issue was the frame that it sits on seemed to fight me every step of the way. Eventually through trial and error I got it to work out. I also had to add a heck of a lot more reinforcement to the beams then I thought I might need, it also required a lot more bass wood to built it correctly. Like the towers, I didn't think of the jutting over-beams until after it was finished.

The last part that was constructed was the central tower. Here I really goofed and didn't make the wall on the motte wide enough as it were. For while I was using a tower that was based off of Shackleton Scotch box. In the end that was just too wide. So I used a liquid egg carton instead which has a smaller footprint to it. Even this presented a challenge as the carton was a bit too short. So all I did in the end was grab another one and added it to the first to get the requisite height.

For which gaming system you might ask? Well it could be for almost any really. Seeing as a I play Warhammer I'll most likely use the rules from Warhammer Historical: Shieldwall, The Age of Arthur, Fall of the West or even Siege and Conquest. Hell I suspect even Warhammer Siege should "work". One other thought is

SAGA which I will freely admit I don't know much about.
For those interested here is the materials list for what you see to make this, all common items one probably already has lying around the painting/gaming area if you are like me.That's all it really is, nothing too crazy for when one is creating terrain and simple to do. Really what it is about is time and perseverance. Any big terrain piece like a castle with take months to complete if you want it done well.

After I took the photos I realized i still needed to add the wooden shields to the rearward towers and the main tower. They are glued now, just need to prime and paint them.

Overall I'm pleased with it and through the painting the wood is a bit lighter than I envisioned and I have been toying with the idea of a mid-brown wash on it to dull down some of the brightness but am still not sure I want to go that route.

UPDATE: since I created this post I have applied one brown wash to the the whole structure but a few of the towers need a second coat of wash.

For paints its really nothing more than: dark drown, medium brown, light brown, black ink, off white (called sandstone) for the lighter sections, blue for the windows and a light brown wash for the light parts to make it look a bit dirty and "lived in."

Future plans include finishing the court-yard and some suitably Dark Ages type buildings.