Wow, the Nippon castle has been garnering a lot of attention on the web, keep up the comments guys and many thanks; especially the shout out here, thanks Scot!

I've stepped back and taken stock of where I am with the project at this point which is to say a lot further along then when I really picked it back up in October. Overall I'm pleased with the pace I've been on and have been enjoying the whole project. I've even found time to work on other projects like the siege equipment, paint a few units and other things that strike my fancy. 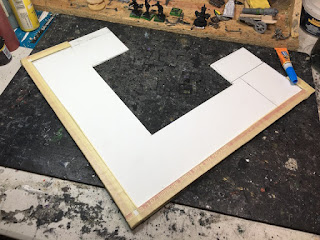 But, the title of this post says Part III so what am I working on right now in relation to the Nippon castle you ask: As I mentioned in Part II I've been re-reading my stack of White Dwarf magazines from the range of #220-235. In particular, in #225, Nick Davis' "Jungle Fever - Part 2" where he covers the creation of his Lizardman Castle has been of particular interest. #224 is where the rules appeared for 5th Edition Siege rules for moats which I'm drawing on as well, so here is the point of this post, moats. 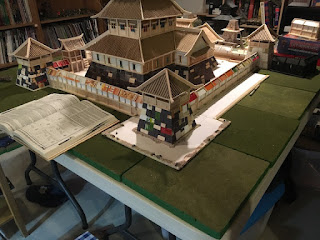 As you can see, I've started on the beginnings of a moat for the castle. The moat will obviously surround the entire castle to simulate a Nippon fortress situated on the lowlands of Nippon (or Nihon?) near rice patties perhaps? I deliberately started at the most difficult part of the moats, the corner towers knowing the wall sections would be far easier. I also took inspiration from the corner board sections of 3rd Edition Talisman.

From there, once finished I also have been formulating ideas to create a way to raise up the entire thing so it will sit on a series of cliff walls to simulate a mountain top type of castle. That is further off and I will be using fair amount of paper-mache to make the mountainside.  In this, the 6th Edition High Elf Army Book has some interesting photos of minis and mountains so we'll see.

Note- my overall progress of my Nippon Army is tracked over here at Dogs of War Online.

Speaking of paper-mache, I took a brief side track to work a tomb/barrow, first seen in the 6th Edition General's Compendium on page 52. I started out when I looked at a barrow I created about 15 years ago. I was going to pull that apart but just decided to create something from scratch. Then remembered the barrow in the a fore mentioned General's Compendium. You'll have to excuse this photo as I remembered to take it as I was applying the paper-mache. But I digress, here is the barrow: 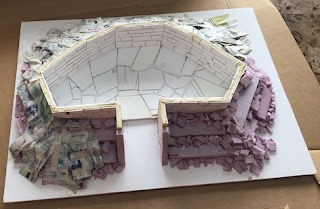 As you can see, the top will be removable because I'm insane apparently and need to add all kinds of stuff to the interior..

And if the barrow/tomb were not enough of a bonus, I've also been working on redoing the river pieces of the terrain that Jeff and Dave created 25+ years ago! I widened them a few years back but now I've added gravel to the river edges and will be painting them shortly. Need to add a few more bends and another river crossing part. You'll have to excuse the quick photo on this one too, I only remembered to take a picture after I had already started on it and undercoated one. 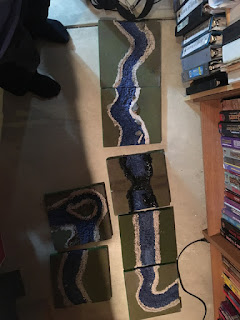 I think that's all for now. Good gaming in the new year everyone.

WM
Posted by Willmark at 5:04 PM No comments:

While I haven't updated the blog in a bit, I  have been plugging away and highlighting my progress on the Nippon castle for Warhammer Fantasy Battle over at Dogs of War Online. One of the things I've been trying to reconcile is that its not an Asian/Oriental/Japanese castle* but a castle set in the mythical Warhammer world. Those are two very different things but it seems I have a hard time separating it!

As such,  the walls and castle are very symmetrical which is very unlike a traditional Japanese castle which snaked back and forth with large sprawling grounds and multiple walls and moats.  Since gunpowder was not widely used in medieval Japan,  castles, were for the most part made of wood and with very large moats. Tthis had the practical effect of  said castles taking up a very large amount of ground.

What I created however is a conceit to the physical limitations of  building a castle at 28mm scale and my gaming table which is  5x6 in terms of feet. It fits, but even with centering it in the middle of the table there isn't a ton of room on the edges (note its not centered in the photos below). While rules exist for playing siege games across the editions I'm planning on  using the siege rules for 3rd Edition, warts and all.

One benefit of using the 3rd Edition rules for siege is this lack of space is accounted for with Remote, Encamped and Ready zones that are part and parcel of the rules. For those not in the know these rules formed areas outside of the table top where action took place, essentially "off table" as it were. 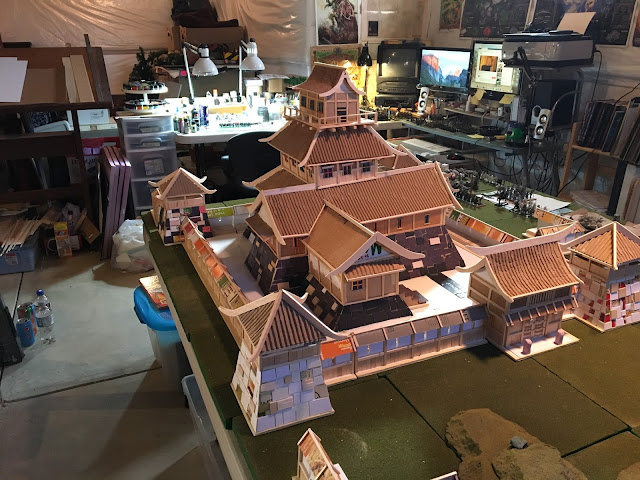 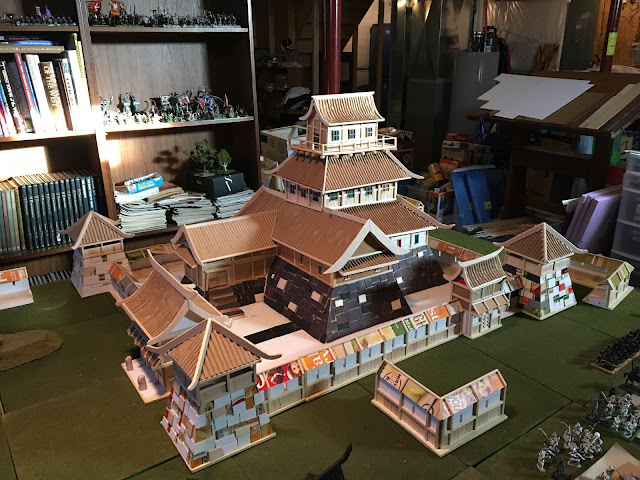 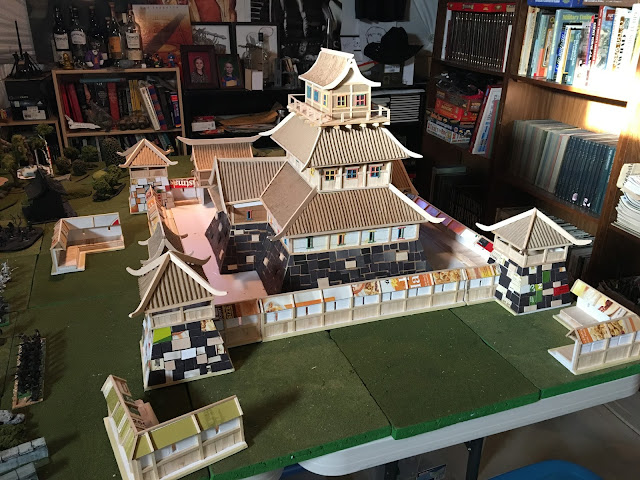 As is depicted above you can see the corner towers are all complete now, along with the previously completed corner wall sections.The tops of all four towers are removable to facilitate the placement of war engines as needed.

After I took these photos I began the process of gluing down stones an gravel in preparation of painting in the not too distant future. I'm also in the process of determining what the "inner" courtyard will look like so stay tuned.

* Note no offense implied, sad this has to be stated, but this is the day and age we live in...
Posted by Willmark at 3:54 PM 7 comments: