For some reason I seem to have an affinity for ogres in Warhammer. I'm not sure why this is mind you as I haven't set out to collect a lot of them, it kind of just happened. A few months back I was able to procure these ogres off of eBay for about $20 less than the going price after having my eye them since around 2001. What are they? Dragonrune Miniatures Ogre Marauders.

Dragonrune Miniatures was in operations from 2001 to 2003 and closed down in 2003 (source). The minis in question were sculpted by Felix Paniagua and obviously look very much in the vein/style of the Warhammer miniatures at the time; his orcs also are very much same style-wise. While Dragonerune went "belly up" they were acquired by Armorcast and you can still get the miniatures. This makes sense as Felix also worked for GW.

As you can see I have all seven of the minis from the ogre line. I have mixed feelings about these guys, not the minis mind you. They are packed with details and a proliferation of skulls, heads, chests, pouches etc. In fact in a way they echo the Citadel miniatures of the mid to late 80s which I cut my teeth on as it were (In fact the left hand most ogre has orange and white haircut akin to the the ogre on the cover of the 1st Edition Warhammer Fantasy Role-play book). And yes I know the troll slayer on the cover had the orange hair... 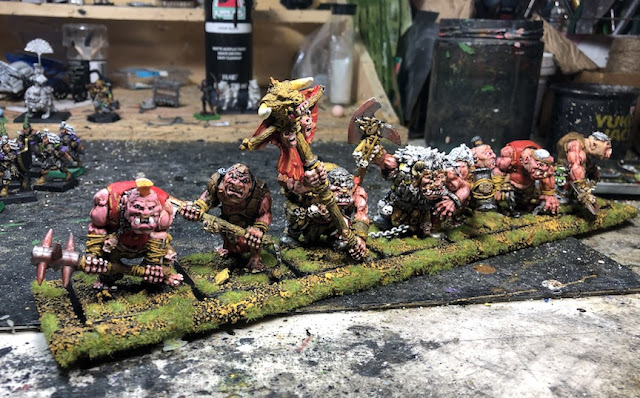 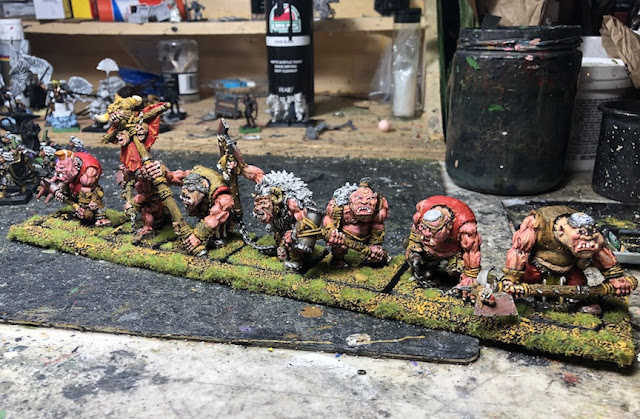 Sorry about the digress, I was saying mixed feelings? This was one of those units and/or minis that gave me a lot of grief when painting. What do I mean by that? Glad you asked. By grief I mean they just did not come together in terms of of the colors as I expected. The skin tones were better than I expected, but overall as noted the whole experience left me somewhat perplexed. I'm not sure about you, but this happens to me every once and a while when painting a unit or miniature, it either is a case where it doesn't come out quite like I intended or wasn't as enjoyable to paint.

I did get to work on my black lining of technique to give them a more oldhammer feel and the washes went well. I also gave the weapons a rusty bloodstained look which on the ogre with the orange/white hair and the ogre with the hammer looks good.

Regardless of the outcome I now have yet another unit of ogres for Warhammer and here is what is in my collection at the moment:
While all of these guys are assigned to an army and in some cases painted to match the armies or their bases/movement trays they could also be used for Warhammer Fantasy role-play or for other Warhammer armies in Warhammer Fantasy Battle proper.  In the case of the Dragonrune ones I just finished above they are painted with the more neutral brown scheme I use for mercenary forces in my collection. Another use could very easily be in my ever so slowly evolving Dogs of War army.

In the end, I recommend these guys, they are excellent miniatures with a very good amount of fine detail to them. In fact if you didn't know you might be forgiven for assuming they were unreleased GW miniatures.

As a final note I think these are the last ogres I will be procuring for quite some time, although there are still some giant ogres from the Marauder line which I quite like along with some more of the classic lines from Citadel. Perhaps I need to switch to the classic giants! So many choices, limited $, but we'll see. Maybe The Warhammer Giant, but only 1,000 were produced...
Posted by Willmark at 9:45 AM 1 comment: 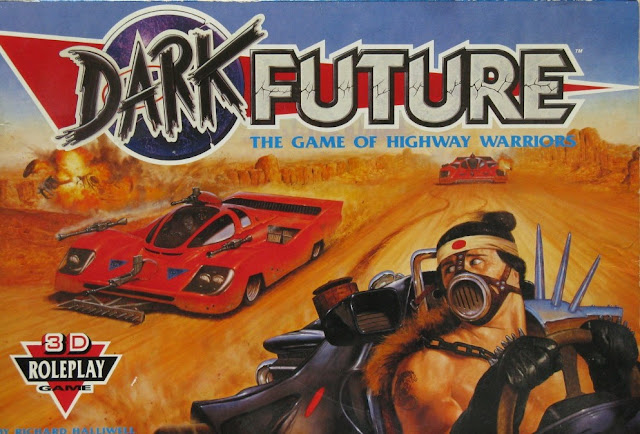 Lets get this out right away, Dark Future was inspired by the Mad Max movies (Mad, Max, Road Warrior and Mad Max: Beyond the Thunderdome). Note: this is hardly a controversial statement and  not one that I ever heard anyone denying mind you, but bears repeating. Back in the day my only interactions regarding Dark Future was seeing the advertisements in Dragon Magazine or the occasional White Dwarf (I didn't start reading WD till around #137). And by the time I could somewhat afford it, it was gone from the lineup and forgotten. One thought also before I go further, why is it that GW once again placed their ultra-violent settings for a game in the USA? I think they were trying to tell us something with Dark Future and Bloodbowl...

This game came back to me a few months back when I purchased a copy of Car Wars made by Steve Jackson Games at the local game store. I got the copy for only $20 so not too bad I thought, but reading through it, holy crap is that game complex. Far too rule heavy for my tastes and very math intense. Now I'm not adverse to crunch heavy games or math heavy, but Car Wars struck me in the same vein as Twilight 2000 in terms of complexity for the vehicle rules. Perhaps a feature of early 90s game design concepts as it relates to cars and the like?

But it was then that I remembered that Car Wars wasn't the game I was shooting for, it was Dark Future! Ahhh well so off to eBay to see what sets are going for? Yeah... looks like I'm going to need to save my gold Guilders for a while, or perhaps go for the "successor game" Gorka Morka? (I'll cover that in a future post). In any event this is one of those ones that's on my radar now, but who knows when I'll get to it. There is something that keeps drawing me to it and I'm not quite sure why, I don't believe its nostalgia either. I suppose its possible to"procure" the rules and use Match-Box or Hot Wheel Cars to simulate it.

Oh and look at that: isn't the internet great? There is a wiki for everything, including Dark Future at Route 666, the Dark Future Wiki. As you can see for a game that had a fairly limited shelf life, it did receive a fair amount of support from what I can gather. Games Workshop did have support for expansions for the game such as the PBS4 Battlecars, but like many of the secondary (late they would get called specialist) games Dark Future fell by the wayside to a large degree by the early 1990s. This coincided with the revamp to 4th Edition Warhammer.

Bell of Lost Souls has more information here on a rumored re-release of Dark Future, but as of late 2018 I still don't see anything on it. EDIT: it appears that the focus was more on a video game release.

I assume if you've read this far you know about Dark Future and probably a lot more that me as I noted I've never played it. Please lend me your thoughts on the matter after some selected photos that graced White Dwarf from the time frame in question, culled from Pintrest and the Lost and Damned site:

I've actually been busy in real life as well as with Warhammer stuff. Over the last few months I've done lots of work on my Dark Elf force along with my wood Elves I've been chronicling here on the blog. Interestingly I've been working on the Wood Elves in the autumn and the Dark Elves in the echoing their basing choices.

Quick aside: the progress on the Dark elves can be found here. I'll have some new photos up soon of their progress.

As we all know, Wood Elf forces in 3rd Edition Warhammer are heavy with bow armed troops. This also carried over to later editions. In 3rd the compulsory choices are archers of which the minimum to field is 30. Aside from my Skarloc Wood Elf Archers all the bow armed units in the army are the result of the PBS3 -Plastic Warhammer Regiment Boxed Set. I know I've said it before, but while not the best miniatures that GW ever produced they are some of the best value around, even now as everyone and their brother has some spare ones to sell on E-Bay or trade. Additionally, to me at least these "looks like Warhammer to me" in much the same way 3rd Edition Talisman "As I know it."

So with all this here are the units I've completed, not one but two units, 20 strong of Wood Elf archers. As you can see green predominates but I continued with the black and white accenting to tie them into the other units of the army, along with the autumnal basing or red, orange and yellow. This now brings the fire power up to 82; three units with 20 and the Skarloc Archers having 22 in the regimental box set.

The 2nd unit (2nd as in I pictures the first unit here and Skarloc's counts as unit #1 for my army) followed by the 3rd. 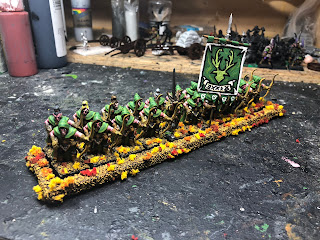 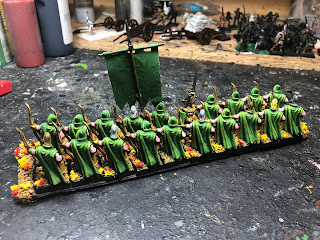 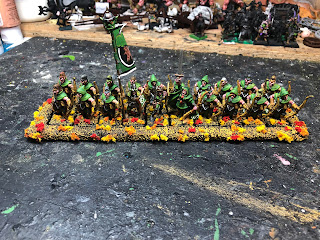 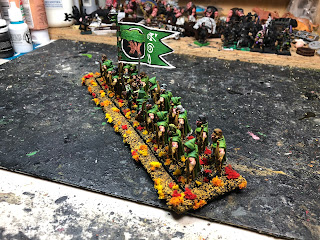 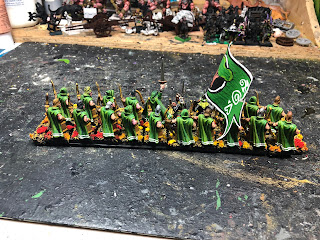 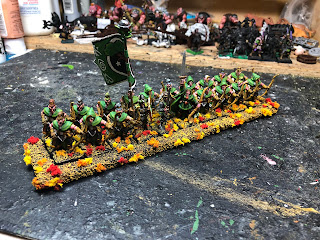 To close out, I'll also need to get pictures up of my Elven Attack chariot that I painted up for the Wood Elf force, it came out well and I realized I finished it several months back. I now have a sizable force of Wood Elves repainted and have come a long way when they were simply an Ally force for my mega-battle with Dave and Jeff.

Posted by Willmark at 1:12 PM No comments: