The "Diceimation" of my d20s

Wikipedia defines Decimation as follows: "a form of Roman military discipline in which every tenth man in a group was executed by his cohorts." It was used to discipline large groups in the Roman Army for failures like cowardice, desertion or disobedience.

In my case the charge against my d20s was unmistakable: disobedience. Punishment was needed.

With this definition my thoughts turned to the lackluster results of my d20s in far too many gaming sessions over the last decade. It was during last nights gaming session that it came to a head, my underwhelming dice continued their pathetic "performances" and would not turn over a result higher than six over the course of several hours. I finally had enough. I had enough of their mocking, their failures, their sneering at me as if they were saying: "Oh yeah? What are YOU going to do about it?" They were about to learn what I would do about it...

My gaming friends and I then side barred in the game and remarked about how truly crappy my dice rolls have been for at least a decade. This included the fact that I once went six years between rolling a 20 in game. I then remarked I should "punish them." But how? Placing them with my 3rd Edition books "to teach them a lesson" (I don't have any 4th edition ones- but that might violate "Cruel and Unusual punishment"), time spent in the "Pit of Doom"?, making them sit in a corner and other milder methods?

I knew that I had to get the attention of my dice and the method would need to be one that conveyed that how deadly serious I was. I have suffered for their poor performances across gaming systems for far, far too long; from poor rolls in Star Wars, D&D to AD&D to tread lightly now. No more. It was time to make an example of one of them. It was time for them to know fear.

As luck would have it there were twenty d20s in my bag, a perfect number for a decimation. I rolled, the lowest rolling die would be the one to suffer the punishment. It would be they that would decide their fate, not me just like the Roman Legions of old. None were spared from the selection process, not even the ancient dice from my Basic and Expert D&D sets from Christmas 1982, not my (in)famous smoke d20 known for rolling 19s quite often (though not for the last 10 years) from my Junior High and High School years. I rolled the twenty dice and the unlucky die was selected... the blue d20 with the chipped numbers it was.

Off to the workbench in the garage. I contemplated hammers, but realized the die would skip off into the environs of the garage somewhere in a pathetic attempt to avoid its fate... So I decided to crush it  with my workbench vice. I lined up other d20s to witness the "dice-imation" in order to teach them a lesson, there would be no averting their gaze. They trembled in fear, a few sneered not believing that I really would do this. Little did they know how serious I was.


With the victim in the vice... it got one last laugh before its fate was sealed. Turns out dice are incredibly solid! The vice would not crush it. No matter how much pressure I applied the die didn't even dent! Its execution temporarily staved off it was as if it was mocking me one last time 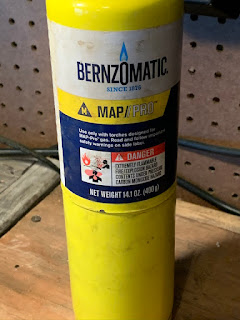 Undeterred I moved onto a MAP gas torch. The torch has been very handy for the restoration of my 1967 John Deere tractor, it was time for it to pull double duty. Once heated up I secured the die in the vice and used my sledge hammer... the offending die then shattered and as expected a few pieces shot out across the garage. I gathered up the d20 and displayed its now broken remains its fellows.

The rest of my d20s looked in horror and a few shot daggers at me, hating me for the deed that was just done. Prior, they had not believed that I would do such a thing, to resort to such brutal methods, smugly secure that they could continue their under-performing ways.

I coldly looked at the cohort of dice and warned them if they continued to fail me one of survivors would be next... And if it still continued, another after that. I paused and glared at all of the assemblage and repeated my threat a third time. My words sunk in.

It was at that moment and not the remains of their shattered friend before them that it finally dawned on how much I meant business. Once the execution was over they were paraded past the shattered remains of their fallen comrade. Not a word was uttered as if they could see themselves as the next one.


The message was received and they silently went into the dice bag wondering which one of them would be next. Fear now gripped them where there had once been arrogance or casual indifference. No more. As I reflected on the lesson my dice had just learned it occurred to me: the die that broke the streak of no 20s for six years? It was the very blue d20 pictured above that was "dice-imated." Karma is funny like that.

The disciplining of the troops is now over, we'll see in a couple of weeks if the rest of the d20s got the message.

Realms of Chaos- Slaves to Darkness

In the hallowed  history of Warhammer and Citadel Miniatures there are two tomes stand out head and shoulders above the rest. It is a two part series of books with the first being Realms of Chaos- Slaves to Darkness and Realms of Chaos - The Lost and The Damned. The focus of this post will be the first one and the later be covered in an upcoming blog post.

Suffice of to say with these two Games Workshop pulled off a major triumph. From the graphic design to the art to the rules the entire book is nothing short of astounding. The overall cohesive feel of the products is carried between the two as well as the artwork. The color photos within were a source of endless inspiration to me back in the late 80s/early 90s and something I still reference today. Tied into this the 3rd edition rule book (naturally) and the rules for Siege (covered here) form everything that is needed for all aspects of fantasy tabletop gaming, oh yeah along with Warhammer Armies. 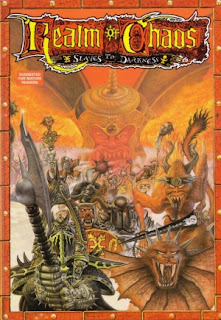 Slaves of Darkness covers two of the Chaos Powers of the Warhammer World: Khorne the Blood God, God of Battle, Murder and Death ("Blood for the Blood God! Skulls for the Skull Throne!") and Slaanesh the God of Lust, Pleasure and Perversion. But more than that, it covers not only the rules for 3rd Edition Warhammer Fantasy Battle, but that of Warhammer 40k as well! And it that weren't enough the rule system also allowed it to also work seamlessly with Warhammer Fantasy Roleplay.

Before I go any further I think its also important to note that any material that included d1000 tables and can pull it off successfully is bound to be good. And to pull off multiple tables so well? Masterstroke!

Slaves to Darkness starts with the idea of a warband and most importantly the role of a chaos warrior on his road to his ultimate goal: that of becoming a dameon prince in the service of his patron power. Random roles determines the characters starting race and characteristics and there can be quite a bit of drift in power here. From there gifts and mutations are determined and not all are entirely beneficial for such is the fickle nature of chaos.

As I alluded to before the most interesting part is the tons of mutations that allow for a nearly infinite  amount of variety. So much so that if the tables are adhered to strictly there is little likelihood that any two mutants will be the same.

One of the things that captured my imagination back in the day in regards to this was the color pages of really cool miniatures. I can remember pouring over them particularly the sample warbands over and over again. The other thing that is great about the book aside from the graphic design (which is top notch) are the color shots of the chaos hordes spilling out of the chaos

In the next post I'll be covering the companion volume: Realms of Chaos- The Lost and the Damned.

Posted by Willmark at 1:35 PM No comments: