Warhammer 3rd edition, back to the best edition 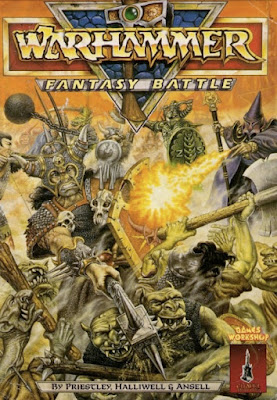 I've now just exited a really busy period in my life, having left my part time job of ten years. So what do I do with this "abundance" of time? I'm going back to the coolest edition of Warhammer, that being 3rd edition, that's what (aside from the never play-tested rules for Siege)!

I say going back because I really never played all that much in terms of the new editions (a fair amount of 5th edition games) but not much else. So with GW unleashing the Age of Sigmar or the fan driven 9th Age... Why bother with any of that? Its been interesting that GW avoided "Edition Wars" that plagued D&D for so long. Are we now at that point? I'm sure people probably kept playing editions they liked previously, I simply wonder if it's more pronounced now with the Age of Sigmar retro-con.

So with this in mind I  dusted off my 3rd edition books this weekend and started looking through everything. That old familiar feeling came back, what a great game it is! A mess, large and unwieldy to be sure but oh so much fun. There is actual strategy in the game, there is actual consideration of movement and formation, lost of random fun and devastating and cool spells.

The main reason I did this was as I get back into the hobby after a nearly three year absence I've started working on my Army of Nippon (which can be found here). The Warhammer Armies Book has Nippon as mercenary contingent that can only be hired by Dark Elves? What the Hell is that? But imagine my suprise when I was tipped off to the fact that 2nd edtion Warhammer Fantasy battle had them as a full army in Ravening Hordes!

So armed with this knowledge I've commenced an Army of Nippon and plan on tinkering with the 2nd edition army list. I may not have to do much as it appears that gamers were to use the 2nd Edition Ravening Hordes until Warhammer Armies came out. I've been working on terrain and securing minis. Right now I'm focused on acquiring ninja; I don't know of anyone who has one of each of the entire lineup, so I might be the first? Big shout out to my brothers over at the Oldhammer forum. I feel at home there with my like of the older editions of the game. Shameless plug: for those looking to help me out with trades or purchases my want list is here.

In a way I've gone home as it were, so I guess you CAN go back.