Since last time I blogged about it I have explained my Wood Elf force considerably. This time however with a miniature that has a long history before it finally arrived on my doorstep. To what am I referring to? The addition of a Wood Elf Wain Lord aka the Elven Attack Chariot.

The Elven Attack Chariot was part of the "Machineries of Destruction" line from Citadel Miniatures. These featured minis from the 1980s were mainly siege engines and the like. They also included foot regiments like Prince Uthar's Imperial Dwarfs, which came in rectangular box, cool artwork and a short story of the machinery or regiment on the back.

An exert from the text:
Prince Iolair Gilandiril drove through the forest on a crisp winter's morning. The frost glistened jewel-like on the branches and on the leaves of the evergreens, and the pale sun filtered through the morning mist to wash the scene with delicate pastel shades.

About 10 years ago I actually won this off of eBay. However, as I sadly pointed out here, it never made it to my doorstep. I still hope that someday it might arrive, but realize it is long since gone in the post and having moved since then makes it doubly unlikely. As best a I can figure it was delivered to the next street over from where I lived; same number for the house, but different street name...

So it was that around this time last year I got this miniature for considerably more than the one I lost out on (I paid $25 plus shipping for the other one!) It wasn't until September 2018 that I got around to painting it after a busy summer.

Of special none is the figure Aesllanan Woodmage figure (to the right) sculpted by Jess Goodwin. I've pretty much always liked this mini, so much so that I bought a second one to paint in the same color-scheme as the one on the chariot. Some would modify the mini so you could take the mage off of the chariot and use on foot on a 20mm base... Not me. I liked it so much I wanted to paint it twice! This mini is also unusual for me as its a fairly light tone for the clothing. I always undercoat in thin watery black paint so when I go lighter it presents its own challenges. In all it came out fairly well in my estimation.


As you can see the chariot miniature overall continues with the autumnal foliage I've used on the rest of the  Wood Elf force. I stayed away from painting the white like in the art on the box; to me that has more of a High Elf feel to it. So more browns and tans it was for the paint and with more gold used than normal to denote a high ranking wood elf noble riding in the chariot.

Here are the goods, my Elven Attack chariot at long last! 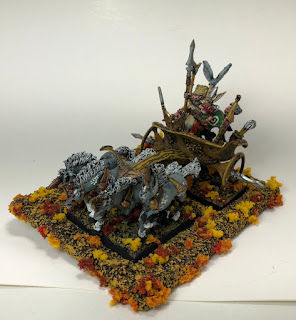 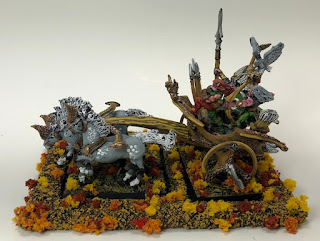 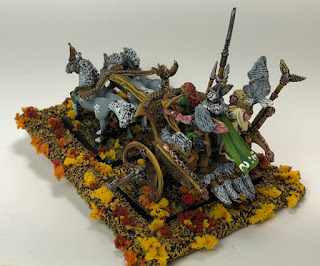 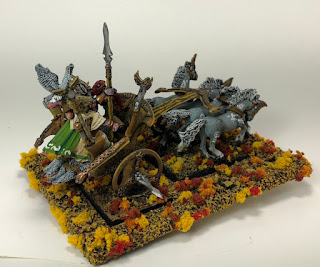