Work continues apace over at Dogs of War Online on my western town of Timber Ridge. As noted its been a busy week(s) so I didn't get as much progress as I would have liked, but did get some solid work in with the Marshal's office and a corral rounding to form.

In addition the the various forms/places of inspiration that has already been mentioned: Tombstone, Pale Rider, etc I came up with another one: from 1951-1999 in North Hudson NY there existed a great little amusement park called Frontiertown. My own memories of it are vague as in going there as a little kid around maybe 4-5 years old so somewhere around the late 1970s; perhaps a future blog post. Its a sad testament in a way; the decline of Frontiertown mirrors America's shifting views and movement away from westerns, but I digress.

The Marshal's office is close to completion at about 60% complete in terms of painting and the corral up next. Take a peak over at Dogs of War Online for all the photos, but here is one of the town proper as it begins to take shape. 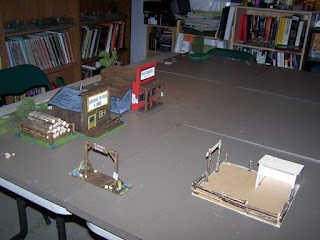 It looks like the minis will be the last thing I get for the gangs/posses as still look over the miniature lines. Right now Black Scorpion minis are leading the pack, but I still have time to decide. I want them to be a bit larger so they will be at least 28mm with Black Scorpion being 30mm in scale.

I've looked at the classic lines from Wargames Foundry and a few other but will still be mulling it over.

I'm also considering what I want to do for wagons and various sundry items. Obviously scale model rail road terrain makes the most sense. Various miniature manufacturers make wagons and carts but like the minis I have time to decide.
Posted by Willmark at 9:40 AM 2 comments:

"You tell um' I comin' for um, and Hell's com'in with me!" Start of my Western Town

Over on Dogs of War Online I've embarked on the creation of a western town, for such games as Warhammer Historical- Legends of the Old West, my game Hurled into Eternity and perhaps even Boot Hill.

Unlike most towns people have created out there on the web, this one is not set in the American South West, but rather in more northerly climes. (As an aside, I love the movie Tombstone and hence the title of this post, but I wanted a look and feel that was something different for an Old West town).

A major inspiration for this is one of my favorite movies of all time: Unforgiven. I've only just started on the town itself so there is not much to show just yet. I anticipate with the pace I'm going at that I'll complete it by the fall of this year, but we'll see what happens.

Here's a single pic with the rest over at Dogs of War Online. Let me know what you think.

Thus, the start of the town of Timber Ridge, a logging encampment, but full of cut-throats, desperadoes and gunmen! I haven't decided fully on minis yet but the 30mm minis of Black Scorpion are the leading contenders. They will come later and perhaps I'll even be adding wagons, carts horses and townsfolk to the setting.