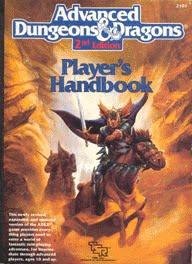 For those of you not in the know I also play 2nd Edition ADD. I'm not a big fan of either 3rd or 4th edition and would play it if I had to, but fortunately I don't ;)

Right now I'm DMing once a week and have been working on a high level adventure on and off for a while. Considering the success of the Word of Hashut I'm pretty confident I can produce a good layout. I'm thinking about writing a module and possibly selling it at Lulu. I am in the process of putting together a high level adventure based on a few ideas that I have had for some time now. Cool thing there is a homage to both the remake and original Clash of the Titans in it.

I dont expect this will happen soon, but I do think that once I finish up Gold and Glory #4 I will have a bit more time.

So as time goes by I'll update here with more bits and pieces.

Warhammer 8th edition and the fate of Chaos Dwarfs? 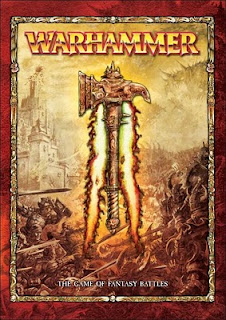 Warhammer 8th edition
As the entire world is now talking about this I might as well post about it too ;)

But rather then hash out all the rumors that have already been gone over ad naseum I wonder what the fate of Chaos Dwarfs will be in 8th. As we know they were inserted into the back of the 7th edition books with the notation of no current rule book or some such. Then through the entire run of 7th, and 6th for that matter, nothing.

The question then becomes will GW remove them this time around? If they are in its probably a good sign that they will continue, if not, who knows what that means but its probably not anything good.

Like any business GW has to make money. They normally do not do anything and teh past results of Chaos Dwarfs are hardly encouraging in that regard. Lets just how that the efforts of www.chaos-dwarfs.com has made them reconsider. I think that they have a far bigger fan base then creating another army out of left field like they did for Ogre Kingdoms.

I'd be hard pressed to name another faction of Warhammer that has more fan support then Chaos Dwarfs. Oh that's right there isnt one!

If they are not included I'm not sure I want to throw in the towel but by the same token the last chaos dwarf book was... 1993. Some people have never even seen the cover of White Dwarf Presents: Chaos Dwarfs! In fact some who are playing Warhammer right now have never even seen them on the table top, some probably weren't even born yet. Man I now feel old.
Posted by Willmark at 11:44 AM No comments: 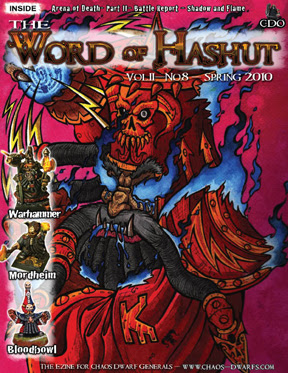 Word of Hashut #8 Finally done!
This is not a review of my own work, but more of a post to say yep its out and I'm glad its done because now its onto Gold and Glory #4 for Dogs of War Online. *

Word of Hashut #8 was a milestone for many ways. For one it is now equal in terms of issues to the Citizen Levy for the High Elves (http://www.ulthuan.net/forum/portal.php) and puts us on par with the Skavenblight Gazette.

Its important to note that for me this is not just about the length of the content or how many issues, truly and simply its about giving something back to the Warhammer community and to keep the dream of Chaos Dwarfs alive.

Its also important that now we are closing in on Issue #9 and 2 years of doing the ezine as well as our 10th issue right after, all fine achievements, but we are not resting on our laurels. we are looking for new ways to make it even better.

Many across the web think we (I) are dreaming about the return of Chaos Dwarfs to Warhammer. To which I say: "What's wrong with dreaming?" To paraphrase from the movie Miracle " I find the term Dream Teams ironic, because now that we have dream teams, we seldom get to dream".

I don't know about you but a little dreaming coupled with some hard work isn't a bad thing.