Of Dark Elves, TSR and the road to 2nd Edition PT. 1 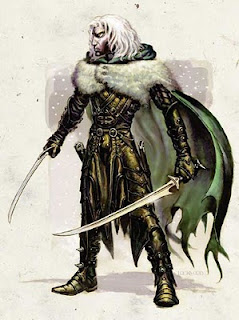 On Dark Elves and their history of the game
(Before I get rolling on this I should present the fact that I read the first books when the came out that featured Dark Elves by RA Salvatore in 1988 with the first of the Crystal Shard; however as you will see my experience fortunately predates this work by a few years).

Before I get into the particulars of the role-playing genre and dark elves in general I think I should point out a few things. Unlike most people that started playing the game I was not a geek or nerd, I suspect that some had the same path as me, but not too many. I played sports (football even from the time I was 7-8), had lots of girlfriends even from an  early age. So suffice to say I was not the lonely "prototypical nerd" staying in my basement playing D&D to the exclusion of all else. In fact some of my girlfriends in high school were downright hot! (what the hell they were doing with me is another post for another time ;) I might be a geek now, but I digress. So for at least me it blows the angst geek stereotype that wants to play dark elves right out of the water.

Now, with all this said I have terrible secret: I have played drow characters! Harsh. Fan-boy, I know? Hardly. However, I have been only two I've played in my gaming life of 30 years and both were fun for different reasons.

My first experience with dark elves started with the first AD&D book I bought myself, the much maligned Unearthed Arcana. Contained within the tome that is really a collection of Gary Gygax's home campaign notes to a large degree were expanded rules for demi-human races: including Dark Elves. Funny when I look at it now, the deep gnomes may have even more munchkin rules then the dark elves! The Druegar and the Dark Elves are about neck and neck in my honest opinion.

Playing in one of of our last 1st edition D&D campaigns in High School before we switched to 2nd I decided to play a dark elf fighter/magic user wielding a spetum and shield to mean effect and casting many a fireball and lightning bolt that crossed his path. This was late 1986/early 1987. I still have his character sheet and looking through his notes finished at around levels 7/9 for about 2 years of play. His name Relendor Silkenweb. The main memories I have of playing him was that he was very much a mercenary and approached most obstacles with that mindset.

My second dark elf was from the 90's and was created in early 1997 for a 2e campaign. Previous the DM tried to get us to play Basic via the Rules Cyclopedia. For one reason of another the group stopped playing and reformed a few weeks later. I played a elf figher with a morbid curiously towards death. With that short lived character called Cormac I came up with the idea of my second dark elf character named Yonel Var-Empyr a dark elf elven knight using a kit from Elves of the Evermeet. Now how I got to this was a bit weird so bear with me. At the time I was re-reading all of the Elric books and being easy reads I plowed through them all. I had even more time to re-read them a third time when I broke my leg in 13 places in March of that year. it was from this thirds read that I would later form up his  back-story.

With all that said the character gained a ton of back history and it melded to the history of the game the DM presented, it was quite organic. He eventually became a leader of outcast elves, mainly surface elves at that. The interesting thing is that at either time with either character I cant say I was influenced by the Dark Elf sagas of Drizzt Do-Urden. Shocking I know? In the first case I looked up some drow names from D3- Decent into the Depths of the Earth and jumbled something around or dropped some letters. In the second case more Elric influence. Can't quite remember how I came up with the second name. 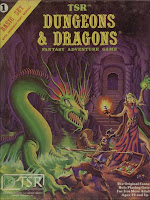 So what does this have to do with dark elves per say I hear you say? Nothing, and everything. As a player that came in a latter wave to D&D and 1st AD&D via the Moldvay boxed set I got for Christmas in 1982, I have a different perspective of TSR and its events relating to dark elves, and the road the led to second edition. I mention these because to many the two are the same thing: dark elves and 2nd edition.

Switching gears a bit: Being 12 in 1985 I only had a vague impression or understanding that Gary Gygax had left  TSR and no idea as to all the reasons till many years later. So with this in mind my friends and I had about 2 years of AD&D under our belts and much of that was figuring out what to do with it and coming up with some munchkin characters that make anything RA Salvatore could come up with look tame in comparison.

We noodled around with both Basic and AD&D and blended them together as I'm sure a lot of people did. I quit that group and joined another group which is where I played my first dark elf listed above. From there I played with some excellent guys who are still my friends to this day, yes even including the 2nd edition games.

Now cross this with my DMing. In my current gaming group either one other DM and I take the DMing chores. In the times I DMed I think I've used the dark elves as protagonists exactly once as a minor story arc revolving around a human PC cleric. When its all said and done my favorite under dark race and one that I often use in my AD&D games is the Derro, another creature that first appeared in 1st edition AD&D...


So thus you have my perspective as a DM (I rarely use them) and in playing since 1982 I've played exactly 2 dark elves. Thus the stage is set for my discussion of Drizzt, Dark Elves and 2nd edition AD&D.


So this closes out Part I. I'll be starting on Part II soon. That next one is going to really get into the meat if you will, mirroring my analysis of the rise of 2nd Edition and the hated cliche of the Dark Elf character, what the archetype means and how it mirrored TSR.
Posted by Willmark at 2:07 PM No comments:

Hey, Hey! Trying to catch up, brief update for now. 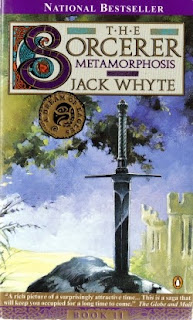 Also on my current Reading list
Now that the holidays are done and the Word of Hashut is underway I thought I'd take a moment out to talk about my latest readings. As noted to the side as it says I'm reading Glen Cook's The Black Company. However my erstwhile friend Simrion just provided me with book 6 of the Camloud Chronicles (or in Canada, A Dream of Eagles) By Jack Whyte / http://en.wikipedia.org/wiki/jack_whyte

This is a great series that I can't say enough about, I have recommended it to a few of my friends and work colleges and thus far no one has disliked it. Without spilling the beans too much it is set in the time of the historical Arthur and gives plausible reasons as to why and how the legends have come down to us the way they have. I say historical arthur by then again that is truly up for debate anyways. I wont spoil it by saying anything further just pick up the series.

Currently I'm on Book 6 The Sorcerer Part 2: Metamorphosis which is  6 out of 9.