As fall starts giving way to winter you know what that means for my Warhammer and hobby activity: it begins to increase, or at least my blogging about it does. I have a lot of stuff that I have been completing in terms of Warhammer and a lot already photographed. In particular I have been hard at work on the repaint of my Wood Elf army which is now quite respectable in size. But enough of the heads up on where I'm at, onto the point of this blog entry: Creatures of Chaos.

As outlined in my previous entry on the matter here I purchased all three of the Creatures of Chaos from Langley Miniatures by Andrew Taylor. To recap, these are great sculpts and I was happy to support them; they also have a fair amount of other minis I'm keeping my eyes on for down the road. The minis are created very much in the vein of the miniatures that Citadel/Games Workshop/Marauder created back in the heyday of 3rd Edition Warhammer.

The minis themselves were a pleasure to paint with very few awkward areas. You know the kind I mean: some minis have areas, usually the undersides that are a pain to try and contort the hand and brush to reach to apply adequate paint coverage.

I decided to mount these minis on 50mm by 50mm bases as that would also allow me a fair amount of space to create some decorative bases in the style of 3rd edition Warhammer. By this I mean the look and feel of the 3rd Edition rule book and White Dwarfs at the time with their crazy painted mushrooms, simulated rushes/weeds and the like. 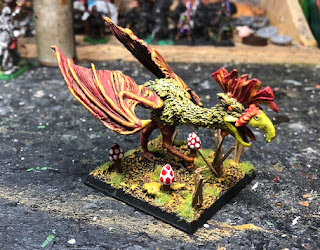 The only real "issues" I had revolved around the paint job of the cockatrice and the chimaera's lion head. In the case of the cockatrice the issue was trying to get the color right so it didn't look muddy or like a dark mustard. As with most photos its kinda hard to see as it shows a shade darker than it actually is. A cockatrice in terms of overall colors isn't quite as simple as it seems to begin with. To help with painting guidance, I did look at the Bestiary in the rule book, the 2nd Edition Advanced Dungeons and Dragons Monstrous Manual and the painted examples from the Langley Miniatures site,

With the chimera, the issue was trying to find the right balance of the lighter colors. 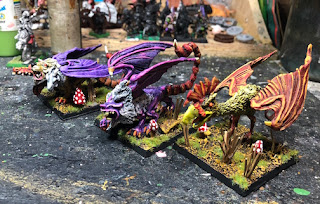 In the end rather than go with a tawny color as one might expect from a lion, I went with one that was more cream/ivory in terms of the shade making it more of a "white lion" (no, not the hair band from the 80s). At first it was a bit of a pain and was not coming out well. Part of this is because I undercoat in black rather than white. But in the end, like plenty of minis that I have done in the past that I thought would not turn out well I kept at it. And sure enough I got it to a point where it came together. This happens time and again and the best advice is to press on and keep painting!

In terms of use they have two primary uses for  armies in Warhammer. The ones that can make use of these minis in their army list are ones that have, imagine that! Thus they make appearances in my 3rd Edition Dark Elf and Chaos forces as a matter of course.

A few bonus pictures of the project. 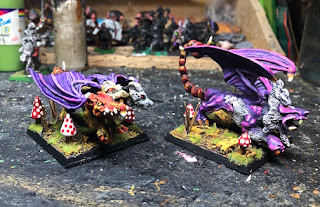 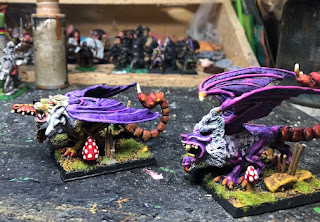 For my next post I'll be turning back to my Wood Elf host for the first time in quite a while. Right now the army has expanded quite a bit including the fact that I now have over 80 painted Wood Elf Archers. In fact looking at the plans for the army, I have probably only four more units to go: Elven Lords (Calvary), another Treeman, 3 more wardancers for the second unit of 10 and a few packs of Animal Handlers aka Beastmasters. For these guys my plan is to use animals from the excellent Wargames Foundy Bears and Big Cats.

As to timing of these purchases? Yet to be determined...

Posted by Willmark at 8:08 PM No comments: