So its late in the year and my ADD has kicked in again (I don't really have it, but it happens from time to time none the less). As you've probably noticed I blog in spurts, which tends to mirror real life. This fall was an exceptionally busy one so I didn't get on here as much as I would have liked.

With that said I'm still noodling along with my game, dusting off my modules and writing them as it strikes my fancy. In the midst of all of that I'm also working on assembling a Nippon Army for the world of warhammer and painting on ocasion. In a way Im liking what im doing right now as I'm not tied to any one project so some updates:

Hurled into Eternity- As often happens Im in a bit of a lull on it right now, a lot of the core concepts of the game are solid and its in the editing phase. I havent been pushing my editor as it still needs playtesting. I like the rule set and hope to get back to it this spring.

2e modules- These are a bit of a conundrum. Right now they first three, W1- Tomb of the Lost Lich Lord, W2- Assault on the Hill Giant Raiders and W3- Aerie of the Ogre Magi Lord are in various states of completion with W2 being the most ready of the three. All will take considerable effort (even W2) to get to their final form.

Nippon Army- this has been fun, Ninja and samurai which was a popular trope of my 1980's youth! Its been a blast collecting minis to assemble my own Nippon army.The mini to the left is one Ive wanted for years but since I finally started working on the army I've slowly been assembling my force. I've also been working on a oriental castle too (check the blog on CDO). 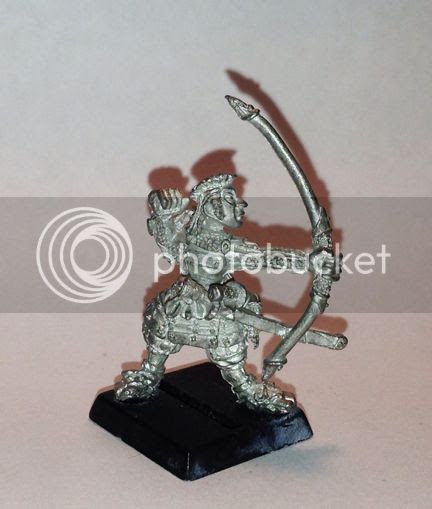 Whats most likely to happen? Not sure yet, I think some discipline is needed on my part, but I do seem to have fun bouncing from project to project. Thats the beauty thus far of it. As much as I'd like to be a small independent game designer I just dont have the time to do so at the momement so probably better to keep it small.

Also since I've been asked a few times the answer is still no for returning to doing the Word of Hashut, while fun and it taught me a lot it was an enormous and time consuming undertaking.
Posted by Willmark at 11:19 AM No comments: