I've been working on a ton of terrain and will have a number of posts on the blog soon covering that. But looking at the backlog of minis I have on my painting desk I've made a conscious effort complete and clear it. I took stock and noticed I still had a lot of dwarfs to paint. And this was after painting 8,000 points of Chaos Dwarfs! So with that in mind and my plan to have separate minis for each ally and mercenary contingent in the 3rd Edition Warhammer Fantasy Battle Army book I got to work.

My Warhammer Fantasy Battle Dwarf army grew out of the need for me to be my own ally. By my own ally I mean as I've noted on the blog before everyone in the gaming group back in our 3rd edition days already had all the "evil armies" picked, that left me to start with the Empire. So when we played really BIG battles like Jeff's Orc and Goblins and Dave's Skaven vs my Empire I needed allies. As a result I had to purchase and then paint a lot of minis. I bought some of Dave's dwarf crossbowmen and that was the nucleolus of my Dwarf army that is now probably close to 5,000 points. 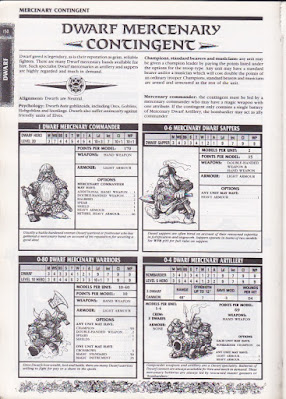 Back to the Dwarf Mercenaries. The minis themselves are mainly from the awesome Battle for Skull Pass boxed set which I had bought two between 2008-2010. Mainly, these were for my 5th-8th Edition Chaos Dwarf. I also got a great deal on a Dwarf box set at Games Day 2008. Thus between these two sets I had enough left over to utilize for the mercenary force even after being used for four units of Chaos Dwarfs. This accomplished another part of my goal: clearing the painting table..

As I assembled the mercs, I realized I had everything I needed to fill out all units listed from odds and ends:

While a separate force from my Dwarf army, one thing I did consider was the color scheme. My larger Dwarf War Host is primarily green and yellow for colors, I decided to do the same with the mercenary
force so if I wanted to use them as part of the larger force I easily could do so. Despite being a seperate force I like the flexibility. In fact with almost all of my armies and contingents I make them so they can span multiple editions as much as possible.

I've talked about it on chaosdwarfs.com before in my chaos dwarf blog about how sometimes units "fight" and the painting can be a pain, or chore. That was definitely the case with the crossbowmen. They were also originally assembled as a Chaos Dwarf crossbowmen. So not only did I have to modify them, but had to do a bunch of green stuffing and scrounge up enough pieces to make a unit. The painting was painful and seemed to take forever.

In contrast the dwarf warrior unit went together easily from assembly to painting, likewise with the miners who function as sappers and the cannon and it's crew. All of these guys were enjoyable to paint.

The armies in 3rd edition Fantasy Battle that can utilize Dwarf Mercenaries are much what one would expect: The Empire & Bretonnia; High Elfs are too snooty to user mercenaries and Wood Elfs don't employ mercenaries at all. All the rest either don't employ mercenaries or are "evil" and thus the Dwarfs would not hire out to them. Oddly the Norse Army list (as featured in White Dwarf #107) doesn’t allow for Dwarf mercenaries either. Now of course its not like I'm breaking any rules for an edition and its usually just Willmark Jr and I playing but I could see them used for Norse. It's also odd that the Dwarf Army itself can't hire them. Personally I'd hand waive that one if the battle called for it.

Because of this, in practical terms it's not the most useful mercenary or ally contingent on the table top in terms of utilization, but one I wanted to complete to "clear the desk".