The Army of Nippon, a castle fit for a Daimyo

Boom, and juts like that.... well not really just like that as this was a lot of work the castle of the Army of Nippon is finished. What started back in the winter of 2013 is complete seven long years later. When I say complete there is still some more stuff to add here and there (mainly the moats) but ready for warfare. 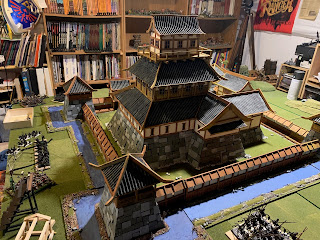 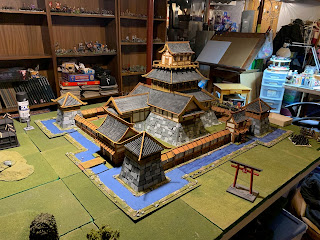 In terms of the moats I'm working on getting a darker shade of blue/green to make it look murky rather than the "bright" blue it currently is.  An old broom is providing the rushes that I'm gluing down with my hot glue gun in small dabs.

In all its fairly practical as the roofs are removable in the manner of a doll house and the interior is painted.

One of my oldest friends and one of the people I gamed the most against in the 3rd Edition days brought up a great idea of running some smaller games where ninja have to fight samurai! This is a great idea as I have plenty of both (although the last two samurai of my quest are surprisingly frustrating to get!)

Now that it's finished? It's time to clear it off the gaming table as Willmark Jr and I are looking to get some 3rd Edition Warhammer games in over the upcoming holiday break!

As I noted previously, next for terrain is a more traditional European style castle in the vein of the Warhammer Mighty Fortress. (good right up on the GW kit here). It's going to be a bit smaller in terms of footprint to fit on the table and more utility for siege games.

Like drawing inspiration for an actual Japanese castle for the Nippon one, I'm drawing from England for the next one, in this case, Harlech Castle in Wales. 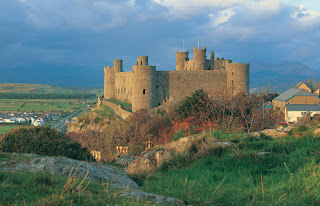 Also of note this will be the 2nd traditional style castle I made for Warhammer. The original one was the one we used for our games of siege way back in the day. It's long since gone. It survived many moves over the years and n various storage closets/rooms when I was living in apartments. Somewhere along the way from my last apartment to my first house it was lost or damaged or maybe both. Sadly, no photos exist of it either.
So onwards to the next project, toothpicks, foam core, cardboard, masking tape, glue, hot glue, thin cardboard, milk cartons, scotch cartons, Popsicle sticks and paitence are all that are required. Hopefully this next one doesn't take me seven years to finish.