The reason for my Nippon mania in Warhammer- 80s Ninja Craze!


As I blogged about here in post here I've been working in my Warband of Nippon in anon again, off again fashion. Currently, its in the on mode, huzzah.

I've just completed a few far eastern/nippon/samuari type major purchases and will be rounding out two units with enough minis to have a sizeable force to play with. I've currently tracking all activity on this particular army over at Dogs of War Online. As you can see I've made substantial progress with the ninja, for those inclined here is a picture from the blog featuring my first unit rounding to form: 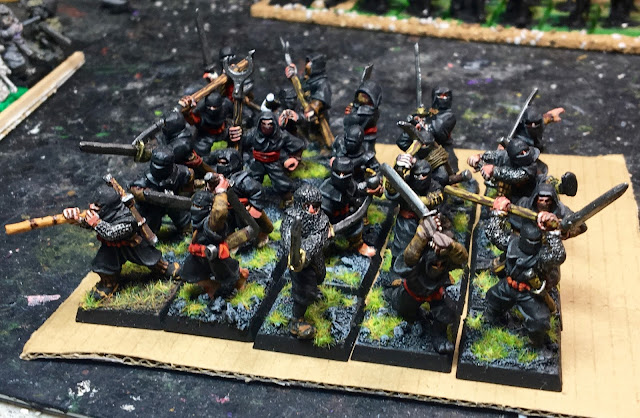 I've been having a lot of fun scouring eBay for these guys and I am nearing the end of my quest to have one of one each of the ninjas from back in the 1980s (there were 48 in all).

But, only recently I stepped back and wondered just why? Why the interest in ninjas? No it wasn't the Teenage Mutant Ninja Turtles either (I missed that by a few years). The roots of my being smack dab in the middle of the 80s Ninja Craze was this awesome great/bad movie, AMERICAN NINJA!


Of course, after watching it on HBO I wanted to be a ninja so of course I then proceeded to make some ninjatō, painted them silver and proceeded to whack the crap out of my friends with them. I also had some ninja stars to fling around too with my main target being the garage drywall. Of one thing I know for sure, I also dressed up as a ninja for Halloween one year too, probably seventh grade. My mom has a picture of it, but I'm not letting that out to become the next internet meme.

So there you go, 80s' Ninja Craze, 3rd Edition Warhammer a few short years later with some vestigial traces (and the let down of no Nippon army from GW*) and then going full-bore later in my life. I guess what was once old is now new again?

As a final thought one does have to deal with a Inverse ninja law...

* Games Workshop teased at Nippon on page 194 of the 3rd Edition Warhammer Fantasy Roleplay book, "For the moment we shall pass over these lands, leaving their exploration to others. A complete guide to the lands of Nippon is already under development." Looks like that became never with the move to 4th Edition Warhammer Fantasy Battle and then "Herohammer".
Posted by Willmark at 8:03 PM